The Strange Connection Between the Heart and Love

February 14 is a day associated with disappointed expectations and heart-shaped boxes of candy. I don’t think the disappointment needs any sort of explanation. Or, frankly, the chocolate (although you can check out my blogs about growing chocolate and the history of eating chocolate if you’re curious.). Instead, I’m wondering why we have that heart shape, and why it is supposed to make us think of love. 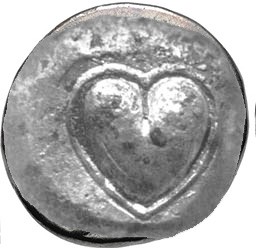 The heart shape was stamped on coins from ancient Libya dating back to about 500 B.C., but there’s considerable debate about when the symbol became associated with love. I’m actually more curious about why we feel that the organ that pumps blood in the center of our chests has anything to do with the emotion of love.

Besides, there are other organs in the human body that become noticeably more noticeable when love or lust enters the picture. It’s not polite in Western culture to send cards with pictures of them, although the ancient Romans had no problem with it.

Anyway, I need more than heart palpitations as evidence here.

Historians have pointed out that the heart was once thought to be the seat of all thought an emotion, so it might make sense that the love/heart association stems from that way of thinking. But it still seems to be a very specialized connection.

While no one has provided me with a good explanation of why the heart is associated with love, I know the connection goes back thousands of years. The Greek poet Sappho described her heart as “frenzied” with love about a hundred years before the minting of that coin with the heart-shaped imprint. And that was three or four hundred years before most famous anatomy experiments that lead philosophers to believe the heart was the center of the human body.

Modern scientific experiments reveal that different parts of the brain go into hyperdrive when test subjects are shown photos of someone they love. Yet when someone grabs the top of their head, we’re more likely to assume they have a headache due to a letter from the I.R.S. than to assume they are overwhelmed with the joy or agony of love.

The upshot is that despite an afternoon’s chocolate-fueled research on the interweb, I still have no idea why we associate the human heart with love, and why a symbol that looks nothing like the human heart is associated with both.

I just know that when I see a heart, I want chocolate.

Of course, the earliest association with the heart symbol had nothing to do with chocolate. It was an image of the seed pod Silphium plant, a type of fennel (now extinct) which was exported by ancient Libyans as a contraceptive.
As far as we know, the heart symbol was not associated with love until about 1500 years or more later. So this may be just one of those strange coincidences that make it seem like we’ve had aliens on the planet messing with us throughout the course of human history.

While there are lots of resources online that review the history of the heart symbol, this article from Ideas.Ted summarizes everything pretty well.

If you’d like to read a fictional account of a woman with a scientific mind trying to understand the reason behind love, check out my story “Dinners with Mr. Danville.”