Love and chocolate naturally go together in my opinion, so today while today everyone is focusing on the former, I’m going to write about the latter. 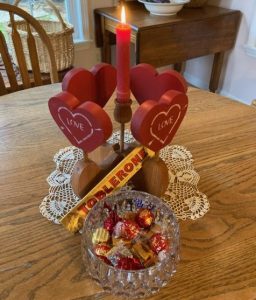 Chocolate was first popular served as a hot beverage like coffee and tea. And it was introduced to Western culture at about the same time as those other hot beverages, in the early 1600s. But today, if someone mentions chocolate, I think about the candy, or maybe a rich brownie or a heavy slice of flourless chocolate cake. We don’t eat tea and only use coffee to flavor a few dishes. So when did we start considering chocolate something to be eaten?

The Spanish discovered the natives of Central America drinking chocolate as a hot, unsweetened beverage. They added sugar and spices and made it popular throughout Europe – as a breakfast drink. One early European recipe combined cocoa beans (called cocoa-nuts at the time), sugar, cinnamon, nutmeg, almonds and pistachios with ingredients we might find a bit odd or even repulsive including pepper, orange flower water, musk and ambergris (an oily secretion from the sperm whale). This mixture was stewed and then set out in a box to dry. But while it presumably could have been eaten, it was meant to be grated into a pan of hot water to drink.

Chocolate “cakes” were being produced commercially even in the not-very-fashionable American colonies by the mid-1700s. During the Revolution, John Baker’s chocolate company smuggled imported cocoa beans past British blockades. But the chocolate was still designed to be ground up and used to make a drink. That’s not the kind of chocolate cake I’m thinking about!

Sam German, an employee of Baker’s Chocolate Company, created a sweetened chocolate bar to be used for baking in 1852, and a Texas housewife invented the German chocolate cake a few years later. (That means the German chocolate cake has absolutely nothing to do with Germany, but it will still appear on Oktoberfest menus every year.) So by the 1850s we were seeing chocolate used as a flavoring in baking— but what about the candy bar?

English company Joseph Fry and Sons is often credited with creating the first chocolate bar designed to be eaten, rather than ground up and used to make drinking chocolate. Some sources say the product was developed in 1830, some put it late in the 1840s. It wasn’t mass marketed until 1847. But because the company wasn’t yet using a chocolate press to extract cocoa butter, the chocolate bars they produced would taste bitter and grainy to modern chocophiles. (Even the manufacturer’s own website admits those early bars would be “unpalatable” by modern standards.) Cocoa butter from the Van Houten press, invented in 1828, was finally incorporated in the manufacture of the chocolate bars in the 1860s, and then they had something we might actually want to spend our week’s allowance on at the corner store.

Maybe next year I’ll research to find out when they started putting the candy in heart-shaped boxes and charging three times a much during the month of February.

If you enjoy reading about food preparation in earlier eras, you might enjoy the cooking scenes in my colonial history novels Restitution and Langley’s Choice.