The names of most inept pirates are long forgotten because they didn’t really succeed in scaring anyone or taking much of anything. However, there is one infamous pirate who really was known for his stupid mistakes more than anything else. 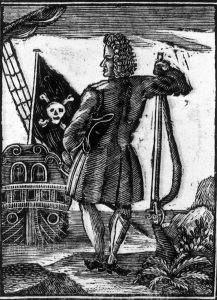 Stede Bonnet was born to a wealthy family in Barbados, was well-educated in the classical sense, and knew virtually nothing about ships. If he had met with a career counselor, it is highly unlikely that “pirate” would be one of the vocational paths recommended for his situation. In fact, the only good reason anyone has come up with to explain his turn to piracy is that he hated his wife and wanted to escape from her. If this was the case, he succeeded in humiliating her at the same time. Not only did he turn to a highly public life of crime, but he failed spectacularly at it, and lost much of the family money in the bargain.

Rather than capturing a ship to start his plunder on the high seas, Bonnet paid for a sloop, bought ten cannon to mount aboard, and hired a crew of 70 men. He named his vessel Revenge, which could either be interpreted as an attempt to sound piratical or a parting shot at his wife. His lack of knowledge about sailing made him increasingly reliant on his quartermaster and undermined his authority with his men. Not that he ever had much to begin with.

Although his piratical pursuits men with some success initially, his luck changed when he decided to head for the pirate capital of the new world, Nassau in the Bahama Islands. He ran into a Spanish man of war and both he and his ship suffered serious harm from the ensuing battle. Half his crew were either killed or severely injured.

While in Nassau, the injured Bonnet met Edward Teach, and their subsequent partnership ended any chance Bonnet might have had of gaining his crew’s loyalty. Despite Blackbeard’s ferocious temper, Bonnet’s men preferred to follow the more experienced pirate, so from then on, Bonnet served as a puppet captain while Blackbeard controlled his vessel, his men, and his actions. After a while, even command of his ship was given to someone else, and Bonnet was heard to mope and complain about his career choice. This did not earn him much respect or sympathy from his fellow pirates.

When the king offered a pardon to all pirates who surrendered and pledged to forego their life of piracy, Blackbeard urged Bonnet to accept the offer and said he would give him back the Revenge. Bonnet was happy to accept, and he sailed to the governor of North Carolina in Bath. Meanwhile, Blackbeard took all the combined loot from their numerous voyages, loaded it on a small sloop, and ran his largest ship aground, stranding most of his crew aboard. He left with a few men and all the treasure. Bonnet was not too thrilled when he returned to find his share of the booty was long gone.

Although he and Blackbeard’s marooned crew members swore revenge, they never succeeded in catching up to Blackbeard. Bonnet soon reverted to piracy again, despite acceptance of the king’s pardon. He started using the name Captain Thomas to disguise his identity. This fooled no one. 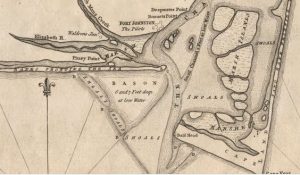 Bonnet was captured near the mouth of the Cape Fear River by warships sent by the governor of South Carolina. While awaiting trial in Charleston, Bonnet escaped but was soon recaptured while trying to collect supplies. He tried to assert in his defense that he had been forced into piracy, so even he gave up any pretense of being a pirate captain. However, the judge didn’t buy his reasoning, and he was sentenced to death. His “piteous” behavior after receiving his sentence apparently upset many of the women in the colony and they appealed to the governor for clemency. Bonnet himself begged for mercy in a letter in which he pledged to mourn all his days in sackcloth and ashes and work as a menial servant for the government if they would only spare his life.

Just like everything else in his career, his plea for mercy also failed. He was hanged in December of 1718.

Today his name is synonymous with ineffectuality—at least among anyone familiar with 18th Century piracy. However, the creek where he was captured at the mouth of the Cape Fear River in North Carolina was later named in his honor. And not long ago someone, perhaps not realizing what Bonnet is best known for, decided to name a posh housing development after him. Home prices start at well over half a million dollars. So, it would seem that the people who live on Bonnet Creek Lane have met with considerably more success in life than Bonnet himself.

Much of the information in this article came from the classic 1724 A General History of The Pyrates by Captain Johnson/Daniel Defoe (depending on who you believe). Some information also came from Blackbeard the Pirate: A Reappraisal of His Life and Times by Robert E. Lee. The historical map of Southport, NC comes courtesy of The Southport Historical Society.  Although Bonnet does not make an appearance in my pirate story Avery’s Treasure, the book does feature a few episodes with Blackbeard during his time of pardon in North Carolina.