The best pirates in history are not funny. Pirates who were good at their jobs took other people’s property by threatening violence, and they were prepared to carry out their threats.

Even if they spoke in a funny pirate drawl and all looked like Johnny Depp, successful pirates were people to be avoided.

Bad pirates, on the other hand, didn’t seem to be much of a threat. They were really a lot like most of us. They wanted stuff that other people had and they didn’t feel like working for it. But when push came to shove, they hadn’t really put much thought into the logistics of their chosen profession, or they were not quite ready to do what they had to do to gain a fearsome reputation.

We can laugh at bad pirates. 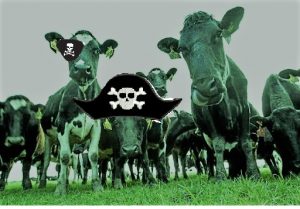 So my summer series* this year will focus on pirates you might invite over for a drink—the guys who were either too polite to take your silver on the way out or too stupid to realize they’d have to turn your flat screen TV sideways to get it through the door.

My first of the worst is pirate Basil Hood. His story is funny enough that it was featured in the Horrible Histories books and TV show. In fact, I had quite a bit of trouble finding a separate source for his story, and when I did find one, some of the facts differed (which is what leads to believe it’s true. When stories are too similar, I tend to believe they all came from a single source.)

While we think of pirates stealing chests of gold and jewels, in reality, they would take nearly anything of value including fabric, dye, spices, and tobacco. When Blackbeard blockaded Charleston Harbor with a flotilla under his command in 1718, the only treasure he demanded in exchange for his hostages was a chest of medicine.**

Basil Hood was not out seeking gold or jewels either. His plan to capture treasure was designed to take everyone by surprise and avoid the danger that those under attack might fight back.

And in that respect, he was successful. He conducted a pirate raid on land and captured a herd of cows from surprised herders. That’s right. They executed a historical stereotype mash-up by rustling cattle while wearing pirate garb instead of cowboy hats.

This unique approach to piracy succeeded at first. With his crew, Hood managed to get all the cattle on board and sail away safely.

But cows aren’t as easy to manage on board a ship as chests of gold. They got sick. According to one source, the cattle had been quarantined because of a local illness that translated roughly from a native language as “Volcano of Vomit.” Whether due to infection or seasickness, the cows made such a mess that the ship could supposedly be smelled from miles away. Some accounts say that Hood and his crew flagged down a passing British warship in the hopes that a capture would be more of a rescue.

Whether or not he actually wanted attention from the British navy, it didn’t much matter. After a quick assessment of the situation, the naval vessel left without arresting Hood and his crew or attempting to confiscate his cargo.

The pirates were safe from the noose. But they may have endured a fate worse than death trying to get back to shore.

The account of Basil Hood is notably absent from the Johnson/Defoe account “General History of The Pyrates” or any of the other pirate books in my collection. You can find information in these online sources: https://piratesofpensacola.tripod.com/id6.html, https://peashooter85.tumblr.com/post/55562549560/not-your-typical-pirate-capt-basil-hood-the, https://www.geocaching.com/geocache/GC43CX8_basil-hood?guid=15595164-3d7a-43cd-a307-6c7a3946b9d3

The real and fictitious pirates in my book Avery’s Treasure spend time looking for booty in unique forms. I didn’t include anything as smelly as Hood’s cargo, however.

*My previous summer blog series have included posts on the history of popular summer foods and tiki bars. See:

**The medicines Blackbeard requested were probably just as deadly as the diseases they were supposed to cure. More about this in a future blog post!