Who Was Eating out of That Manger Anyway? Animals at the Nativity

When I started building my nativity set, we could only afford to buy a few figures and I got animals to go along with the nuclear holy family because I thought a young child would find furry four-legged creatures more interesting than men in bathrobes. Each year we added a few pieces to the set until my husband declared a moratorium on adding fake wood figurines to the scene on the coffee table. There was no more room at the inn, so to speak, or at least not enough room to set down a coffee cup on the carpet of geographically dubious fake snow I laid out as the base of our scene. 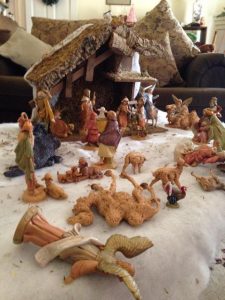 This year, as we looked over the collection and watched wobbling angels push shepherds off the edge of the table, my daughter asked what animals would actually have been at the nativity. She had her doubts about the turkey strutting around in the loft, as if thrilled that he had survived another Thanksgiving. I agreed that turkeys were unlikely since their native habitat is about 7,000 miles from Bethlehem. So, then I started to wonder what animals might really have been there eating out of that manger.

The word “manger” is the only real clue we have to the animals or even the scene in general. In the Gospel of Luke, Mary wraps Jesus in swaddling clothes and lays him in a “phatne.” This Greek word is often translated as “manger,” but sometimes as “stall.” Scholars debate exactly whether the angel was directing the shepherds to look for the Messiah in a feed box or a cattle stall. I am no expert on Greek, but this does seem to indicate that there may have been some cattle in the vicinity when Jesus made his entrance.

Cattle trained for farm work and transportation are often referred to as oxen, and it is the trained animals who were more often kept in stalls. The cattle common in the Bethlehem region would have been smaller than the dairy cows and beef cattle we are used to seeing, but they would still be much bigger than a newborn human, even one of divine origin. If I’d been Mary, I would have been nervous that my baby might be trampled or mistaken for a mouthful of fodder.

Besides cattle, we also tend to think of sheep in the nativity scene, since the sheep keepers are the first to learn of the holy birth. However, the sheep might not have been invited in. Donkeys could have been around, since they were commonly used for transportation and Mary might have ridden on a donkey to Bethlehem. Scholars speculate that if Joseph brought his wife in a caravan, however, Mary could have traveled in a basket on a camel. That means camels might have witnessed the nativity even if the wise men hadn’t yet arrived. 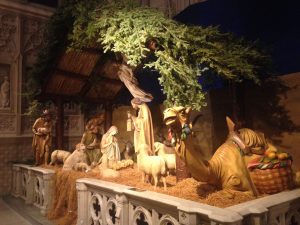 However, it is unlikely that Mary and Joseph had to share space with ducks, geese, chickens, pigs, cats, parrots, and dogs as sometimes depicted. Apparently, it was the 18th Century Italians who started creating nativity scenes that included figures from their everyday life including fortune tellers and market shoppers. The vast popularity of these Italian creches explains why so many nativity sets today make it appear as though Mary and Joseph celebrated the birth of the holy infant in Naples in 1750 rather than Bethlehem in 4 B.C.

Our Fontanini nativity set is definitely of that variety, featuring a rustic wooden stable with a 99% in-accuracy rating. Shelter for animals in the arid Judea region would most likely been some type of stone enclosure such as a cave or the ground floor of a stone house. It was common for guest chambers to be located in upper rooms while lower rooms might be used for animals. The word often translated as “inn” in the Gospel of Luke can also refer to the guest room in someone’s home. It is possible that Mary and Joseph stayed in the lower level of a relative’s home because the guest rooms upstairs were full of other family called in for the census. While it may seem hard to believe that family members would put a pregnant woman in with the livestock, it is possible that her pregnancy was considered scandalous and she might not be particularly welcome.

Regardless of whether the manger where Jesus lay was attached to the Bethlehem equivalent of a Motel 6 or the lower level of a family home, either way it was probably just as full as animals as the other spaces were full of people. The livestock may have consisted entirely of cattle, with a few donkeys, but that doesn’t make for a very interesting creche. So, we will continue to fill our coffee table with an unlikely assortment of domestic fowl, dogs, camels, sheep and even the occasional dinosaur. After all, Jesus came to save the whole world, including the questionable parts of it.

Wishing you a blessed Christmas and a joyful new year ahead!

Last year, I considered whether King Herod deserves a spot in the nativity scene.

For more information about the historical details of the nativity, you might check out:

If you like reading about chaos at Christmas, you might enjoy one of my historical Christmas novellas such as Change of Address or my cozy mystery Worth its Weight in Old which involves rehearsals for a disastrous Christmas play.