When the luck of the Irish fell off

Even in broad daylight, Dunluce Castle is a rather eerie place. Stark stone ruins reach toward the sky like skeletal fingers digging up their way up out of the ground. But that description fits at least half the castle ruins in Ireland, a place where stone castle remnants are about as common as McDonalds golden arches are in America. 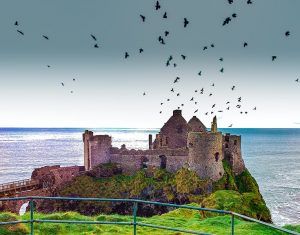 The tragedy has been embellished over time, so it’s hard to know exactly what happened that night. It was in 1639, a few years after the second Earl of Antrim took up residence in the castle. Though the earliest castle buildings on this outcropping of rock on the north coast of Ireland were built in the 1300s, the most substantial living quarters in the Hall were much newer and elegantly appointed. Lord and Lady MacDonnell, though titled as the Earl and Countess of Antrim in Ireland, moved in the first circles of wealthier English society. (In fact, Katherine Manners, the Countess, was the widow of the Duke of Buckingham and considered the wealthiest woman in England at the time of her marriage to Randal MacDonnell.) Inventories from the time show that the castle was furnished with items such as scores of fine upholstered chairs, elaborately inlaid cabinets, a full library of books and telescopes and other scientific tools. Tall windows, unusual for the time, particularly in a castle, let in extra light.

But the Countess was not happy living at Dunluce. Apparently she hated the noise of the sea, and when you’re living on a giant pile of rocks surrounded by ocean and accessible only by a narrow bridge over the water, it’s pretty impossible to escape the sound of crashing surf. And it’s wet. And cold. The roar of surf and the salt spray in the air is intense. I love the ocean, yet after only a few minutes at the site, I understood how the overpowering sense of the sea on all sides could become oppressive.

So imagine how ominous the sea sounds after you know it has claimed the lives of your kitchen staff? There’s actually some uncertainty now as to whether it was the kitchen or another chamber of the castle that collapsed into the sea, but a number of people were in the room when it fell, which indicates that the collapse came without warning. Legend says that only one boy sitting in the corner survived, while the rest of the room simply disappeared.

One aspect that accounts all agree on is that Lady Katherine MacDonnell refused to live in the castle after that and insisted on having a new house built away from the sea.

Dunluce Castle proved unlucky in other respects as well. The first family to own the castle was essentially tricked out of their holdings. The Second Earl was arrested by one of his own dinner guests and taken prisoner. In 1584, the castle was badly damaged by an English artillery siege. In fact, for hundreds of years, Dunluce and the land holdings around it were fought over as the English sought to subdue Ireland and reward Scottish families who were loyal to the crown. Some would say that is why Dunluce has no luck of the Irish – because it was taken from the Irish and given to “foreign” clans. But all clans are “foreign” if you look back long enough, and I don’t think Dunluce is any less Irish than Blarney or any other castle on Irish soil.

No less Irish, but maybe less lucky. Then again, if the owners of the other castles in Ireland were so lucky, then why are all of them in ruins?

I have yet to write a book set in Ireland, but the luck of the Irish runs out for my fictional character Jack McCready in my story Restitution, which takes place in the days leading up to the American Revolution. For more information about the Irish in America, check out my blogs on the Coffin Ships, the Five Points neighborhood in New York, and the photodocumentary work of Jacob Riis in How the Other Half Lived.