What is a Tiki Drink? 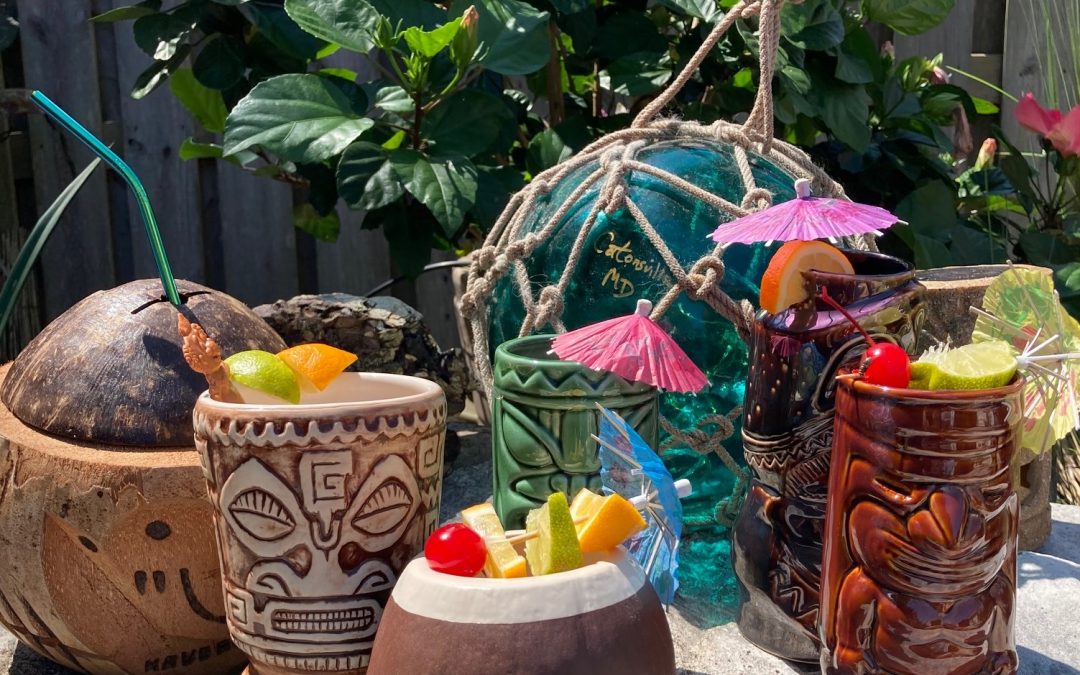 While tiki fans may disagree about the what makes a bar a genuine tiki bar, there is no doubt about the fact that a tiki bar must offer at least a few tiki drinks. Of course, what constitutes a tiki drink may be up for debate.

In the original tiki bars discussed in my post on the history of tiki, the drinks were known for their exotic names and ingredients. Don the Beachcomber and Trader Vic’s sought to offer patrons an escape from mundane (or worse) daily life. So rather than an ordinary beer or martini, guests could order drinks such as a: 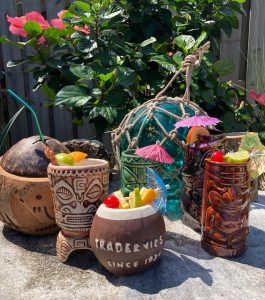 Many of the drinks featured rum but the reasons given for the preponderance of rum vary depending on the source. Some say the liquor was prevalent at the end of the bootlegging era in the 1930s. I heard reports that liquor distributors even required bar owners to buy certain quantities to reduce their stock. Other reports say Victor Bergeron and Donn Beach developed an appreciation for aged rum during their travels. Whatever the reason, rum features prominently in many, but not all, tiki drinks.

But rum is more the bass rather than the front man of the tiki drink band. What people remember most are the sweet flavorings, garnishes, and fruit juices. Often, the sweetness disguises a really potent punch.

Many classic tiki drinks, including the mai tai, require the use of the complex flavor mixture orgeat. I’ve been experimenting with this flavoring for the last month and don’t think I will ever learn how to pronounce it. But I have definitely learned to appreciate it.

Orgeat is a syrup made of almonds, sugar, water, and flavorings such as rose water or orange flower water. The earliest recipes for this mixture seem to date from the mid 1800s, when it was diluted with water and served as a summer beverage on its own. However, similar drinks date back centuries. Some early recipes included barley, and most used bitter almonds, which contain cyanide and can thus be poisonous if ingested in large quantities. Those who make orgeat now generally omit both the barley and the cyanide.

When added to a drink, orgeat imparts a complex, sweet flavor that really can’t be replicated with anything else. Many bartenders substitute amaretto or even grenadine, which is why tiki drinks have a reputation for being sickeningly sweet. Classic tiki drinks made with orgeat include the mai tai, scorpion, fog cutter, and the Japanese cocktail (which pre-dates Prohibition and the tiki craze, but can still be found on the menu on occasion.)

Tiki drinks are perhaps best known for an overabundance of garnishes and serving vessels that look like they came from the gift shop of a really tacky anthropology museum. Imagine Carmen Miranda climbing into a hollowed out Easter Island statue clutching a giant pink paper umbrella. A drink can’t really be tiki unless it’s decorated with at least three different types of fruit, flowers, and/or bizarre swizzle sticks.

While the garnishes steal the limelight, however, it is the alcohol in tiki drinks that leaves the lasting impression. The original mai tais featured copious quantities of aged rare dark rum. Sweet flavorings in tiki drinks often mask an ingredient list with a high proof count.

One of the most dangerous tiki drinks is the zombie. Legend has it that after learning the hard way, the drink’s creator refused to serve more than two of these to guests at Don the Beachcomber. This six-ounce drink features one once of 151-proof rum, three ounces of other types of rum, and small quantities of lime juice, grapefruit juice, cinnamon syrup, absinthe, grenadine, bitters, and an almond spice mixture known as Falernum.

We started experimenting with different cocktails this summer, until we got tired of crushing ice and squeezing limes. Our favorite turned out to be one of the most simple, the Army Navy. While it lacks the classic tiki name and the garnish is modest, I’m listing this recipe because it does at least contain orgeat. And since the “navy grog” is a classic simple tiki drink, so really I think this should be, too.

Shake all ingredients together with ice and strain into a chilled glass. Garnish with a twist of lemon peel.

How easy is that? Most of the time we leave out the bitters because we can’t be bothered to look for the bottle. But I think orgeat will be a staple in my refrigerator from now on.

The internet contains a wealth of information about and variations on recipes for tiki drinks. Some sources to check out include:

I have yet to include a tiki drink in one of my books, but the pirates in my story Avery’s Treasure do spend a lot of time on the beach drinking rum and brandy…