What Does Your Irish Name Mean?

It’s a rather arrogant exaggeration to say that everyone wants to be Irish on St. Patrick’s Day, but it is true that those with some family ties to Ireland are more likely to remember them around March 17. And it’s a great excuse to drink Irish whiskey or the most popular beer served when I was a student in Ireland, Heineken, which if not Irish, at least comes in a green bottle. 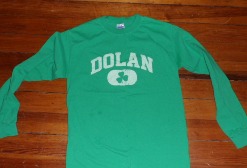 Last year about this time I came across a website with information about Irish surnames and I thought it would make a great blog post. And it’s only taken twelve months to delve into the topic. Since anybody with internet access can post an article online, there’s no guarantee that what’s out there on the subject of Irish names is accurate or even a good guess. But it’s still fun to look. Here’s what I found:

Whether or not any of this is accurate or applies to me, it has definitely inspired an interest in learning more about the clans of Ireland and life before the Viking raiders and English armies charged in and changed the power structure.

I will probably never be able to pronounce my name as it would sound in Gaelic, but I can “sign” it.

If you enjoy reading accounts about the disreputable reputations some Irish immigrants gained when they crossed the Atlantic, you might enjoy my story Restitution about an Irish peddler in the days leading up to the American War of Independence.