We Should All Know Her Name, Too.

With the way history is taught in schools these days, more kids could tell you about the accomplishments of Rosa Parks than those of George Washington. Whether that’s a good or bad thing is a subject I’m not going to tackle at the moment. The injustice I want to point out now is that while everyone hears about Rosa Parks refusing to give up her seat on the bus, so few people learn about Elizabeth Jennings, who pulled the same move more than 100 years earlier– before the Civil War and the Emancipation Proclamation. 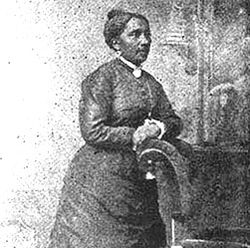 Jennings was the organist for her church in New York City. On a Sunday morning in July in 1854, she was running late, so she decided to speed her trip by hopping on a streetcar (which at that time was pulled by horses). The conductor ordered her to get off. She refused. The conductor tried to remove her by force, and eventually succeeded, but he needed the help of a police officer to get the determined women off the streetcar.

Just like with the bus boycott sparked by Rosa Parks in 1955, the defiance of Elizabeth Jennings triggered an organized effort to end racial discrimination on streetcars. Of course, the blacks in New York at that time couldn’t boycott the streetcars, since they weren’t allowed on most of them in the first place.  Bolstered by support from her father and other prominent African-Americans such as Frederick Douglas, Jennings filed a lawsuit against the Third Avenue Railroad Company, which owned the streetcar line.

The judge instructed the jury that African-Americans “had the same rights as others and could neither be excluded by any rules of the Company, nor by force or violence.” This is pretty forward thinking for 1854, but just to show that equality was not the norm, the judge did qualify his pronouncement by specifying that to have those rights, the blacks had to be  “sober, well behaved and free from disease.” I would like to think that he meant for those qualifications to apply to riders of all races, but who knows? In any case, the jury, which was probably all white and certainly all male, found in favor of Jennings and awarded her damages equal to about $9,000 in today’s currency. Local newspaper stories report that she had originally asked for about twice as much, but some members of the jury didn’t want to give such a large award to a “colored person.”

The courageous actions of Elizabeth Jennings brought about the end of discrimination in public transportation in New York. But not immediately. Public transport, which in those days meant horse-drawn buses and streetcars, were not owned by the government but by private companies. The Third Avenue Railroad Company may have decided it could not afford to kick off any more passengers, but that didn’t stop the Eighth Avenue Railroad from doing so. That required another lawsuit a month later, again won by the passenger who had been refused transport. It wasn’t until about 1860 that public transportation was fully desegregated in New York.

Rosa Parks took an important action and served as a leader for the Civil Rights movement. But I think the actions of Elizabeth Jennings are far more remarkable. In an age where women were supposed to be meek, demure and obedient, she took a physical stand against injustice without being coached or supported by a professional rights organization. Her name should come before Rosa’s in the stories we pass down to our children.

Because she did it first.