Was “the Wall” in Games of Thrones Based on Hadrian’s Wall?

When I read that “the Wall” in Game of Thrones was based on Hadrian’s Wall in Britain, I didn’t think that made a lot of sense. Then I realized that could be because I knew almost nothing about Hadrian’s Wall. So, I decided to research to look for similarities as well as differences between the two iconic walls. 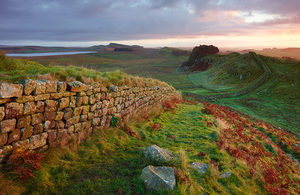 Hadrian’s Wall in northern England was built to guard the northwest border of the Roman Empire. The Emperor Hadrian not only ordered the building of the wall, but also may have designed the structure, which was something of a marvel. Stretching from coast to coast for 80 Roman miles (73 modern miles), the wall is the largest Roman archeological feature known. Besides the wall structure itself, Hadrian’s Wall included earthwork mounds and ditches and several forts, towers, mini-forts (called milecastles or fortlets) and other structures.

The building of the wall marked a shift in Roman philosophy. Instead of seeking to expand the empire as predecessors had done, Hadrian sought to maintain and preserve the empire. This was much less glamorous, but probably a wise move because by the time construction began in AD 122, the empire was spread out over a distance that would be difficult to manage even with modern communication and transportation.

The reason I did not think this feat of engineering compared with the “Wall” in Game of Thrones is that Hadrian’s Wall seemed so short by comparison. Of course, Hadrian’s Wall appears really low today in most places because local residents began re-appropriating the stones for their own building projects pretty much as soon as the Romans left. Originally, the wall stood 16-20 feet high with a width of about 10 feet, although the dimensions were smaller in some places than in others. So, it would have been imposing, but not the (nearly) insurmountable obstacle posed by the Wall in Game of Thrones.

This brings me to the dissimilarities between the walls (and I must admit I haven’t read very far into the books yet, so this comparison is based primarily on the TV series). For starters, the Wall in Game of Thrones is THE Wall. Hadrian’s Wall, by contrast, was abandoned not too long after construction because the Romans built another wall 100 miles further north. The Antonine Wall was 40 miles long and built of turf rather than stone, but it was reinforced with more forts than Hadrian’s Wall. Under the leadership of a less ambitious emperor, the Romans moved their boundary back to Hadrian’s Wall, but then tried again in the north one final time before giving up in around A.D. 211. Within another 200 years, the Romans had abandoned Britain entirely.

The primary difference between the GOT Wall and the two English walls was the use of the structures. In the fictional world of GOT, the Wall prevents the wild murderous tribes from the north and other undesirable creatures from invading and attacking settlements south of the Wall. This function is accomplished primarily by the sheer size of the wall rather than the men garrisoning the fort.

Hadrian’s Wall and the Antonine Wall, by contrast, may have offered some protection from raids, but this probably came chiefly from the soldiers stationed along the wall, patrolling it from a height that enabled them to see what was coming so they could prepare a defense. Instead, Hadrian’s Wall may have served less of a defensive purpose and more of an administrative one. Marking the border of the empire, it regulated the entry and exit of trade goods. The wall served a customs and immigration function as much or more than a defensive one. After all, an empire like Rome needed substantial tax revenue and may have valued that more than the land itself.

So why, after my research, do I now find it easier to believe that Hadrian’s Wall inspired creator George R.R. Martin to create the very different Wall in Game of Thrones? It is because all these walls delineate a change in attitude. South of Hadrian’s Wall, the Romans expected to find a certain measure of civilization. It may have been provincial, but the society and basic comforts were at least within acceptable margins. North of the wall, they might meet with decent people, but they could not rely on anything, including a welcome. The north country was the great unknown. And most humans have a fear of the unknown.

The first time I considered this concept was in college when I learned about “the Pale,” the area of English control centered on Dublin in the Middle Ages. Englishmen who ventured “beyond the Pale” risked falling prey to the native barbarians. Since my ancestors include both those barbarians and the invaders, I wanted to write a story about adventures beyond the Pale. I’ve toyed with plot ideas over the years, but still haven’t written that story yet.

Given my apparent inability to write anything serious, I’m guessing those adventures beyond the Pale will involve more imagined danger than real. In other words, the story will be the complete opposite of Game of Thrones, where the average character has a life expectancy of 1.3 episodes. To research this story, I will of course need to go back to Dublin.

But now I think I may need to visit Hadrian’s Wall as well.

For more information about Hadrian’s Wall, visit https://www.english-heritage.org.uk/visit/places/hadrians-wall/. Although I have yet to write my medieval story about going beyond the Pale, in my book Langley’s Choice, my characters are thrust outside their easy lives into a land of discomfort and annoyance, so in a sense, they are forced go north of the Wall.