Unlocking clues from a pile of stones: the shipwreck on Molasses Reef

The Turks and Caicos National Museum looks like a little old house because that’s what it is. But the displays inside don’t have much to do with the building or the people who lived there or even life on the islands in general. Most of the museum is devoted to the wreck of an unknown ship. 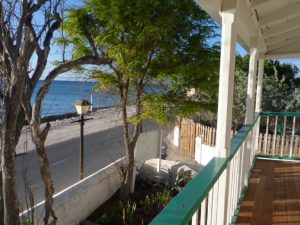 During the “age of Discovery” roughly 1492 to the 1520s, over 120 European ships are known to have wrecked in the waters of the Americas. The caravel discovered on Molasses Reef was not one of them. Its name, owner, crew and mission remain a mystery. The “mystery wreck” has actually answered a lot of questions, however, because it is the oldest excavated European shipwreck in the Western Hemisphere. It gives details about a type of ship that once roamed the world but then faded from record.

For centuries, historians knew that explorers such as Columbus sailed in caravels, but no one was quite sure how they looked or operated because there were no plans in existence and no remaining vessels. The wreck on Molasses Reef, which was dated to approximately 1513 based on the types of canon and pottery carried onboard, provided a great deal of information about this once prevalent vessel.

Actually I don’t understand how the wreck provides so much information because a 400 year old shipwreck doesn’t look like a ship at all. It looks like a pile of stones. And that’s what it is, in essence. The biggest clue to the presence of a shipwreck is a ballast mound—a pile of stones that once rested deep in the hold of the ship to keep the vessel’s the center of gravity low and provide stability. When divers spot a mound that looks like it could have come from a ship, they look closer for other remains. In this case, the distribution of the ballast and marks on the sea floor indicated where the hull originally rested before most of it disintegrated.

However, on the Molasses Reef shipwreck, historians learned almost as much from what they did not find. For instance, they did not find anything that was common on later 16th Century vessels, which corroborated the dating by pottery and ordnance. Though they found weapons, storage jars, and medical instruments, they found no items that would have been carried or worn by individual sailors, such as buttons and buckles. Based on the complete lack of such items, they have assumed that the crew was able to make it off the vessel before it sank. 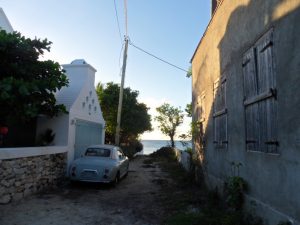 Considering that it was found in 15 feet of water, that’s not hard to believe. The Molasses Reef was called a “ship trap” because it encompassed such a large shallow area of coral far enough under the surface that it could not be seen until a vessel was stuck.

Though I certainly didn’t understand all the details, I really enjoyed how the museum laid out the artifacts and explained how they provided clues to the vessels operation. There was even a recreation of a square from the archaeological dig placed on the wall so that visitors can see it as it would appear to a diver.

The Turks and Caicos National Museum is on Front Street in Cockburn Town, the only town on the island of Grand Turk in the British West Indies. Until the 1970s, the island was home to a sea salt industry, but it was too small to remain profitable, and the industry and most island traffic dried up. Then a few years ago, an enormous cruise ship terminal opened up a the south end of the island. 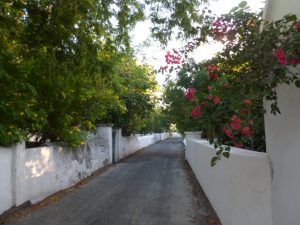 Most passengers seem to stay right there at the mammoth Margaritaville right on the beach, or wander in the attached shops. But I found it highly worthwhile to take a taxi a few miles into the quiet Cockburn Town to enjoy the walk through picturesque streets lined with walled gardens, 19th Centuries houses and public buildings, and the beach at Columbus Landfall Park.

It is one place I would definitely like to visit again.

If you enjoy reading about Caribbean islands and shipwrecks, check out my book Avery’s Treasure which features cameo appearances by real pirates including Calico Jack Rackham, Charles Vane and even Blackbeard.