Teachers are often put in a difficult position in today’s society, but I think the situation faced by their historical counterparts was often much worse. A governess brought into a home to teach girls and younger boys was expected to be everything but was treated as nothing.

To begin with, according to a servants’ guide published in 1826, any candidate for a governess position had to be “respectable and well-educated.”  That education was supposed to include the ability to  write a “graceful” letter, speak fluent French and have some familiarity with Italian. (The language, not the food.) She should play piano well enough to give lessons, and preferably play harp and guitar as well. She should be able to teach the elements of fashionable dance and “not be ignorant of” arithmetic. (It seems clear that dance was considered more important to the female education than math, however.)  “Of course” the governess was expected to be an expert in all types of needlework, and she should also know geography, popular sciences and literature. And she should be an expert in drawing, as well, because it was “so essential” for the young ladies to achieve proficiency in this skill in order to be considered “accomplished.” 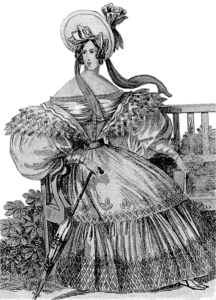 The governess probably would not be attired quite as fashionably as this, but she would be training young ladies who would need to be prepared, both physically and mentally, to wear this sort of monstrosity. Perhaps the recommendation for weight training is not so surprisingly after all…

Nevertheless, the expertise of the governess should be doled out in limited increments so as not to weary their pupils too much. (Modern teachers and students alike might appreciate the opportunity to take advantage of this advice. Alas, educational theory has changed) After a couple of morning sessions of instruction, the governess was supposed to supervise afternoon sessions of “exercise and amusement.”  One surprisingly modern bit of advice is that even if the weather was not suited to outdoor exercise, the governess should encourage “such amusements as induce exercise” including dancing and rope skipping (or jump rope, as we refer to it in this country) and the use of dumbbells.

I find these last two suggestions very remarkable. It’s not easy to jump rope in a long gown and satin slippers. And we don’t think of weight training as inducing the soft flacid feminine form depicted as desirable in the fashion magazines of the period. However, it is perhaps important to note that sleeves were starting to become quite large on ladies’ garments during this time, and they would soon grow to epic proportions. (Some critics called them “imbecile sleeves.”) Extensive weight training might have been necessary simply to enable women to move their arms.

Even more difficult than a governess mastering all these skills and skipping rope in a gown with beret sleeves, however, would be managing to have a life of her own. Governesses were trained to fit into polite society and yet they were not a member of that society. At all times, the governess was expected to display good manners and good temper and a genteel exterior. This makes sense, since she was supposed to be training the young ladies under her charge to exhibit these behaviors themselves. But this instruction in the servants’ guide is very telling: “the governess…ought to be able to conduct herself in such a manner, as never to render an apology necessary for her presence at family parties.”

Ideally, all the family members at that party should also conduct themselves that way, too. But for the governess it’s spelled out as a duty. You are not one of us, the family says. Please don’t embarrass us. Even if we misbehave, you must not, because you are not as good as we are.

If a governess followed all the rules, according to the servants’ directory, she would be entitled “to live on a footing with a family, when there are no special parties.” In other words, she was good enough to be around the family when there were no witnesses present. And even then, was expected “not to intrude” on the domestic privacy of the family. Clearly, she was not good enough. And yet, at the same time, she told that “of course” she must not “make herself too familiar with the domestic servants.” So she was allowed to be with the family, but must not act like one of them. And she could be with the servants, but she must not become friends with them. She was destined for a lonely life.

It is no wonder that the governess was often featured as a sad figure in literature. Though her physical position was relatively comfortable, her emotional life had the the potential to be quite horrid. She was a damsel in need of rescue, either by a romantic hero (with money) or through the cleverness of her own devices.

I, for one, am glad I live in an age with a few more employement options for women.

The quotations in this article are from The Complete Servant: Being A Practical Guide To The Peculiar Duties And Business Of All Descriptions Of Servants published in 1826 by Samuel and Sarah Adams.