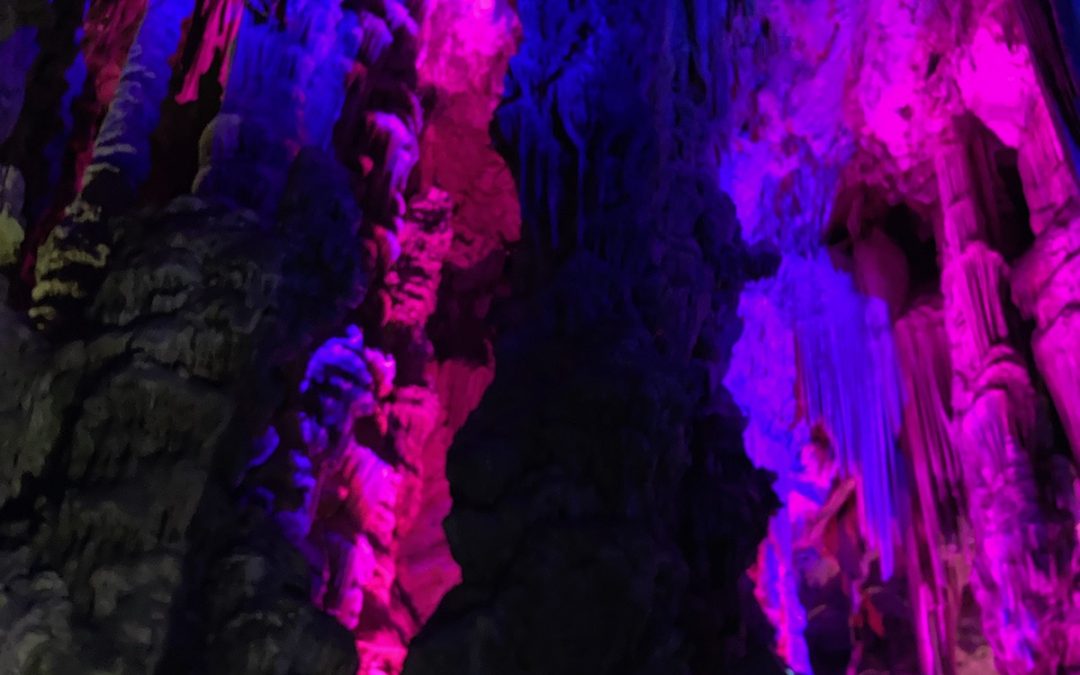 After our recent cruise around the Iberian peninsula, the story I’ve told people the most concerns an unfortunate experience with a creative, foul-smelling pickpocket ruse in Málaga, Spain. However, what I personally hope to remember most from the trip was my wonder and awe while crossing the Strait of Gibraltar. 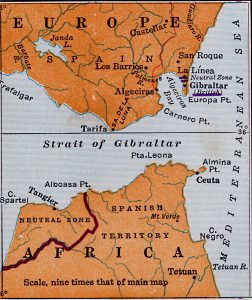 On one side of the ship, we could see the Rock of Gibraltar and slopes of Cádiz, Spain. On the other side, our view featured the towns at the base of the Rif mountain range in Morocco. At the narrowest point, only 8 miles of water separates Tarifa, Spain from Mount Jbel Musa in Morocco.

I felt like I was going to get whiplash at the dinner table. I could look out one set of windows and see Europe, and turn to the other side to see Africa. Two continents at one meal. The Atlantic Ocean and the Mediterranean Sea connected by a narrow channel. So many ships pass through the Strait that it feels like you are sailing as part of a fleet.

Because the meeting point of the two bodies of water is also a popular feeding ground for whales and a crossing point for migratory birds, authorities set a speed limit through the Strait, which gave me a little more time to enjoy the views as I walked in circles around the deck. (Europe, Africa, Europe, Africa, Europe, Africa…). When we passed through the Strait for second time on our trip, I was a little more restrained, although I still had the binoculars out a lot. I didn’t pace the decks for quite as long, and I took a lazy photo of Africa from inside our stateroom. 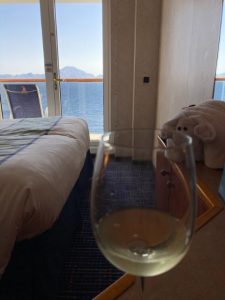 The two high points of the Strait–the Rock and Mount Jbel Musa—were known to the ancients as the Pillars of Hercules. And the caves under the Rock of Gibraltar were thought to be the gates to Hades—the road to hell.

Those distressed at the moral decay of modern society would probably not be surprised to find that the road to hell is now beautifully illuminated with colored effects and fitted out with a state-of-the-art sound system for concerts. The devil himself could not have made it more appealing.

While the extensive caves are fascinating, so many tourists pass through the site that groups are herded through in quick succession with time to do no more than take a few rushed photos. Tour vans crammed with eager visitors wind their way up the rock through a series of hairpin turns that would make it a challenge for Barbie to get her convertible through without scraping the paint. 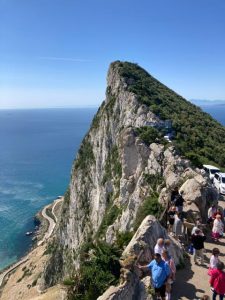 I don’t know how they do it. They make brief stops to give tourists time to take photos of some cheesy pillars, the caves, the monkeys, and the airport that crosses the main road so that traffic has to be halted every time a plane takes off. Then it’s time to head to town for duty-free shopping.

Because of that rushed, overpriced tour, the visit to Gibraltar itself was frustrating. I didn’t even get a glimpse of the underworld. I do hope to go back sometime and walk back down to give myself more time to take in the views—both on top and under the rock. 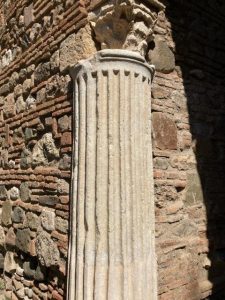 Although connected to Spain, Gibraltar was seized by the British I 1704 and remains a British Overseas Territory. The name derives from the Arabic Jabal Táriq. The pillar in the photo is much better looking than the ones tourists pose with on Gibraltar. This Roman pillar was incorporated into the medieval alcazaba at Malaga.

If you enjoy stories of landlubbers’ experiences at sea, you might like my books Langley’s Choice or Avery’s Treasure.