Anyone who has studied American history knows about the Boston Tea Party. When a group of angry colonists protested British taxation by dumping chests of tea that belonged to the British East India Company, the British responded by closing the port and taking over the colony’s government. 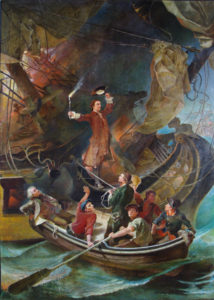 Today is the anniversary of Maryland’s tea party, known as the Peggy Stewart Affair. It was in many ways a more blatant protest than Boston’s event. Rather than dressing in costume and sneaking on board ship at night, the colonists involved in this protest on October 19, 1774 acted in broad daylight and insisted on not only destruction of the tea, but of the entire ship carrying it.

Why didn’t the British close the port of Annapolis in response? Well, most likely they didn’t care. Both the ship and the tea were owned by a private individuals. And by this time, so many locations were holding protests that this one may hardly have been noticeable.

It was a big deal in Annapolis, however, because it forced people to take sides. At issue was not only the question of whether the British government had the right to levy a direct tax on colonists or take control of colonial governments. Most were in agreement that the British had overstepped their boundaries. The bigger question was how far people were willing to go to assert their right to be free of this taxation and excessive control.

The Peggy Stewart was a small merchant vessel owned by Anthony Stewart and his father-in-law James Dick. In London, representatives from a rival merchant firm loaded tea on the Peggy Stewart but allegedly told the captain of the vessel that the packages contained linen. The captain suspected otherwise and just before the ship sailed, the customs documents revealed that the packages did in fact contain tea. Maryland colonists, like many others, were boycotting British tea to protest the taxation and the British treatment of Boston. So when the ship reached Annapolis, the captain knew there would be trouble.

The Peggy Stewart had numerous problems and contraband tea was only one of them. The ship leaked badly and barely made it across the Atlantic. And the main cargo consisted of 53 indentured servants sold into service in the colonies. Once the leaking vessel arrived in Annapolis, no cargo could be removed until the tax on the tea was paid, the indentured servants were considered cargo. The vessel was not likely to survive another Atlantic crossing—in fact it was in danger of sinking right in the harbor. So feeling that he had no choice, Anthony Stewart paid the tax.

This made him an enemy to every patriot in town, or at least the “grab your torch and pitchfork” variety that fueled their righteous anger with spirits and rhetoric at the ordinary taproom. After several days of negotiation, Stewart agreed to sign a paper stating he had behaved wrongfully and that the tea should be burned.

And then a mob set up a gallows and decided that maybe he should be hanged, too. Or maybe his house should be burned. Instead, they moved the party down to the harbor and demanded the burning of the ship. To appease the mob, Stewart eventually set fire to his own vessel. And so the Peggy Stewart burned as a symbol of patriotism. Or perhaps the power of mob mentality.

The Peggy Stewart Affair demonstrates that there are at least two sides to every story. Rarely, I think, does anyone take action from an evil motive. We may have motives that are selfish, but mostly I think it is when our motives simply differ that there is danger in being misunderstood. Too often we ascribe evil motives to what we simply don’t understand.  The result is destruction, anger and division.

The Peggy Stewart Affair was later looked back on as a moment of proud patriotic action. But at the time, I think it may have caused more harm than good. Neighbors who might have been able to agree on the nature of their protest were suddenly polarized and found themselves fighting each other as much as the British.

And they say those who do not learn from the past are doomed to repeat it.

We can look back at the Peggy Stewart affair as a patriotic episode from the past. Or we can view it as a lesson about the dangers of political division in the future.

Your choice–thanks to our ancestors, it’s a free country. 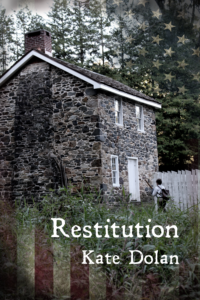 If you’d like to read more about The Peggy Stewart Affair, you might enjoy my historical novel Restitution. Set in Maryland in 1774, the story explores differing attitudes on the eve of revolution. Several scenes involving the Peggy Stewart Affair were based on events chronicled in the Maryland Gazette and elsewhere.   For a list of resources documenting the event, check out http://teaching.msa.maryland.gov/000001/000000/000030/html/t30.html.