The origin of delayed flights

When airline flights are delayed, we feel cheated and helpless. After all, if we’re running late, we know the airline isn’t going to wait for us. But think back to a time when airlines didn’t attempt to keep to any schedule at all—because neither airlines nor scheduled flights had been invented yet. The period ended in 1914 when the first scheduled airline flight departed from St. Petersburg, Florida. 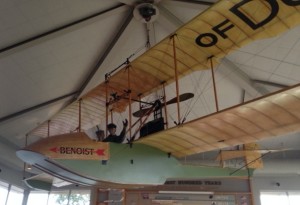 The concept of an airplane was still foreign to most people, and it had only been ten years since the Wright brothers succeeded in suspending a modified bicycle in the air for a few seconds above Kitty Hawk. Airplanes were very much a novelty, but a group of visionaries wanted to change that perception. They chose Tampa as the ideal location for the first scheduled flights across the Tampa Bay to St. Peterburg. It may sound strange to fly such a short distance, but at the time there were no bridges or causeways across the bay, so travel between the cities took 2-3 hours by boat, 7-8 hours by train or all day by car (the roads were wretched). By air, the 21 mile flight across the bay took 23 minutes.

Investors in Tampa weren’t interested. So the proponents of the project approached the city fathers of rival St. Petersburg instead, and they agreed to contract the St. Petersburg-Tampa Airboat Line to provide twice daily passenger service across the bay. Tickets cost $5, which was about two to three days’ wages for a well-paid factory worker, and it works out to about $117 in today’s currency. So the airfare was not that far off from a one-way fare these days, though the distance was about 20-40 times less.

Those first scheduled flights did not have beverage service, flight attendants or seat assignments. However, since the capacity of the airplane was two people and one of them had to fly it, the passenger’s choice of seat was somewhat limited.

I don’t know if they had a standard safety lecture, but they should have. Both of the airlines’ two pilots, Tony and Roger Jannus, were killed in plane crashes just a few years after the inaugural commercial airline flight. Planes were not exactly the reliable means of transportation they are today, regardless of whether the flights were scheduled or not.

But though the St Peterburg-Tampa Airboat Line suffered mechanical failure on its very first flight, the line never suffered any casualties. That could be because the airboat was actually a boat and it flew across water the entire way. As one pilot explained, it was like having a runway the entire route. There was always a safe place to land.

Another reason for the stellar safety record could be the fact that the airline stayed in operation only three months. The city contracted with the line to provide service during high tourist season, January to March of 1914. After that, the contract was at an end. The company dispersed and everyone went on to different projects.

But they succeeded in their mission of creating a scheduled service with a new means of transportation.

And they gave birth to a whole new means of frustration.

Information for this article came from the St. Petersburg Museum of History. The plane in the photograph above is a recreation of the Benoist XIV airboat used by the St. Petersburg-Tampa Airboat Line. The waving pilot is either a mannequin or a very slow-moving museum employee.

If you enjoy reading about travel in tropical climates, you might enjoy my book, Avery’s Treasure. (Since the story is about the heyday of piracy in the Caribbean, travel is by boat rather than plane, and while there are no flight delays, service is frequently interrupted by rival pirate vessels.)