The Never-Ending Quest for a Safe 4th of July

“Stay safe!” has become the most common parting wish bestowed by friends and strangers alike in these COVID-centric times. All across the country, municipalities have cancelled 4th of July celebrations to keep people from gathering so that they remain safe.

But this quest for a safe 4th of July is not new by any means. People have been lamenting the dangers of 4th of July celebrations for well over a century.

Although John Adams recommended that the Declaration of Independence be commemorated with “Parade, with Shews, Games, Sports, Guns, Bells, Bonfires and Illuminations from one End of this Continent to the other ,” he also advocated solemnity and speeches of remembrance. For decades afterwards, the day’s festivities usually included special dinners, ceremonies, and a reading of the Declaration. 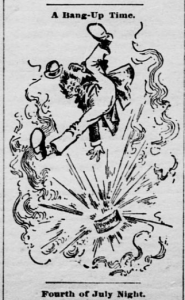 However, there were usually some incendiary aspects of the celebrations as well, and many people lamented the increasing prevalence of these local explosions. For instance, in 1900, the Hocking Sentinel in Logan, Ohio ,published a demand for a return to the old traditions where Independence Day was commemorated with speeches instead of “the rush of a rocket” or “the explosion of a pack of crackers under a tin pan.” Elsewhere in the same edition of the newspaper, one celebrant reports that many boys used up their supply of firecrackers before breakfast, so apparently many felt no compulsion to wait until evening to light up.

Of course, noise was not the only problem. In 1906, the July 4 evening edition of the Minneapolis Journal expressed cautious relief that the damage from the day’s festivities was relatively minor. “If a sane Fourth of July is possible,” the editors note, “Minneapolis had one today.” Front and center in the edition, however, was a description of the injuries caused by fireworks, such as an eleven-year-old boy with his fingers blown off and a five-year-old girl who was carrying a “torpedo” in her mouth when it went off. These were apparently not considered “serious” injuries.

The torpedo that young girl was holding was substantially different from firecrackers that can be purchased these days. A torpedo is a fuseless impact cracker that explodes when it comes in contact with a hard surface. The “snap” crackers of the modern era, even the so-called “adult” version, are nowhere near as powerful as the ones once popular with children, particularly girls. These types of firecrackers have been used since at least the late 1700s and may date back as far as the middle ages. The traditional torpedo crackers cannot legally be offered for sale now.

We tend to think of burns as the primary danger from 4th of July fireworks, but blood poisoning and tetanus were often just as harmful. The five-year-old in Minnepolis was suspected to be in danger from blood poisoning, and in 1910, the Richmond Times-Dispatch reported “a third more deaths and twice the number of lockjaw cases due directly to explosions and fire used in celebrating independence.” Community activists across the country advocated for a “safe and sane Fourth.”

Today, federal, state, and local laws have long banned many of the dangerous products that led to what newspapers referred to as the “red casualty roll of Independence Day” in past years. Although illegal fireworks may be more prevalent than in previous years due to the cancellation of official celebrations, most people probably do not view these pyrotechnics as the primary danger this year. The specter of Corona virus will keep many people at home, either out of respect for the safety of others or in fear for their own safety.

The never-ending quest for a safer 4th of July shows that despite documented problems, the United States is primarily made up of people who genuinely seek to correct the mistakes of the past and improve the prospects for the future. In this time of political division, I hope we can remember that we share this goal, even as we disagree about the means of achieving it.

Most of the information in this article came from newspapers available through the Library of Congress Research Guides. These include:

If you’d like to read about some of the arguments advocated by ordinary colonists as they debated whether to declare their independence, you might enjoy my novel Restitution. I’m not sharing the links to the sources that explain how to manufacture your own torpedoes and other fireworks…