Freedom Trail is Best When it’s Not Quite Free

I had one day to spend in Boston and had done zero research about the best places to visit. The only outing planned in advance was a trip to Fenway in evening, so that was one landmark we knew we’d see. What to do before that? My husband said I had to follow the Freedom Trail.

It’s like following the Yellow Brick Road, except that the bricks are red and the flying monkeys look more like pigeons.

There is no charge to walk between the landmarks on the Freedom Trail and the route is marked on the sidewalk, but if you want to know what the landmarks actually are, it helps to have a guidebook. So my walk started with the purchase of a $9 guidebook in the visitor’s center on Boston Common. I followed the red brick trail from the visitor’s center to the first landmark. It was a statue. At that point, I was ready to toss the book in the trash. Even to a history nut like me, statues are BORING. 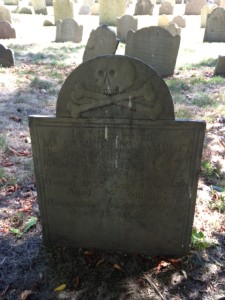 The next stop was a church that was locked. But the third stop was a burial ground that advertised more famous skeletons than any other graveyard in America. Things were looking up. Trying to avoid the groups of tourists clustered around costumed tour guides, I decided to focus on the gravestones of un-famous people, figuring they might feel left out. I took pictures of the stones with the best skull-carvings coated with the least amount of bird poop. Only after about ten minutes of this did I see the polite sign asking me to stay off the grass-covered graves. Oops!

My guidebook talked about Beacon Hill so I wandered off the trail to admire the big townhouses for a while. Then I rejoined the trail at King’s Chapel, an interesting old church with a controversial history. The colony of Massachusetts was founded by Puritans who braved an ocean journey

This pulpit in King’s Chapel was built around 1720 as part of the old church and was kept when the new church was built around the old later in the century. One of the spindles turns the opposite way from the others and is “flawed” intentionally to reflect the imperfections of our sinful human nature

to start a new life far away from the king’s Anglican church. So when the Anglicans wanted to buy land to build a church in Boston, the Puritans wouldn’t sell them any. Determined church builders appropriated land from the Puritans’ burial ground and built a chapel. Years later they wanted to expand but knew they couldn’t take much more of that graveyard. So they built their new church around the old one and when they finished, they tore up the old wooden building and threw the pieces out the windows.

Today you can sit in the original pews “owned” by the families of Paul Revere and other 18th Century worthies. The church also offers free pipe organ concerts. While there was no charge for admission, they asked for a $2 donation which I gladly paid since the signs posted throughout the sanctuary provided me with more than $2 worth of information.

My guidebook is 78 pages long so I’m not going to write about all the stops along the trail. The one that surprised me most was the Paul Revere House. I expected a small simple dwelling, but what I didn’t expect was the oldest house I’ve ever seen in the U.S. Built in 1680, the house is sole remnant of an earlier era in Boston’s history. It was built by a wealthy merchant and quite posh for the time period, though by Revere’s day it was fairly modest and not very fashionable. Today the house is set up partially the way the would have looked in 1680 and partially the way it would have looked in Revere’s day. Coming inside in from a big city in 2016, it makes an impressive impact. And admission was only $3.50. I highly recommend stepping inside to get a sense of what life was like in colonial Boston. You can also get a good sense of the past every day life in town in the old shops at

the Blackstone block, which includes numerous houses and restaurants, all which claim to Ye Oldest in America.

While I am not writing about every stop on the trail, I did try to at least give a passing glance to every site mentioned on the trail, including “The Old Corner Bookstore” which now houses a Chipotle fast food place. Who knew the Founding Fathers were so into burritos?

After the Revere house, I decided I was going to have to speed up a bit so I could finish the trail and make it back to meet my husband for our trek to the baseball game. Of course, I had to go to the Old North Church, where someone hung some lanterns that signaled to Revere that the British were comi

ng by some particular mode of transportation. I was a little short on the details and didn’t have time to read the book. But I went through the church, sat in the old pews, and said a prayer that the Red Sox wouldn’t completely massacre the Orioles in our presence that night.

The steeple of the Old North Church — you know, the old “one if by land, two if by sea” place

Then I moved on. I could see from my map that I’d almost reached the end of the trail and I felt a great sense of accomplishment. Then the map ended and the line of bricks kept going. Turns out the map went onto the next page. I still had the USS Constitution and Bunker Hill to see and I was already almost out of time.

A practical tourist would have planned to get up early and visit the sites the next morning before we had to leave. But no one’s ever accused me of being practical. I decided to power walk until I could see the foot of Bunker Hill. My journey took me over a steel bridge that was a little too open for comfort and through some beautiful old neighborhoods. I saw the hill. I turned around, back through the neighborhoods, over the scary bridge, and then I finally left the red brick trail to find my way to our hotel so I could grab my Adam Jones jersey. On the way to the hotel, my GPS took me through an amazing park stretching along five miles of old rail pathways, the Southwest Corridor Park. I wish every city had one!

So my overall impression of the Freedom Trail was that it was an easy, inexpensive way to get a good sense of the history of the city. And the Freedom Trail can even be free, but if you part with some cash, you’ll get more from the experience. My total was $17.50, which is the price of admission to a single site in many places. As it turned out we got a pretty thorough tour of Fenway Park that evening too because I ended up walking around the whole park looking for a drinking fountain.

Best of all, my prayers from earlier in the day were answered. In fact, our team even won the game. And Boston fans were quite friendly. So my one-day experience in Boston was quite favorable. I will be back!