The Dubious History of Jump Rope

I thought I would combine my favorite subject—history—with the subject of my latest book—jump rope—and write a blog about the history of jump rope. However, I should warn you that I could make up just about anything in this blog and you’d be hard pressed to prove me wrong. It turns out there’s little real evidence about the history of skipping rope. 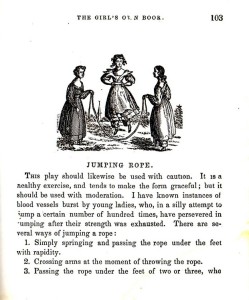 The Jump Rope Institute speculates that the sport began in Egypt where skilled athletes jumped over vines.

The International Rope Skipping Federation says that jump rope originated in ancient China where ropemakers played at game called Hundred Rope Jumping as part of their New Year’s celebrations. (The Traditional Chinese Game League confirms this – more or less. They say jumping rope was called “jumping 100 threads” because a rope circling through the air looked like it had been split into 100 separate ropes. But most of their discussion of the “tradition” involves a Chinese Jump Rope which is a large elastic loop that is nothing like a “western” jump rope.)
The National Double Dutch League suggests that the style of jumping known as Double Dutch, where long ropes are turned toward each other while one person jumps in the middle, originates with ancient Phoenician rope makers. They would walk backward from one another on ropewalks while twisting strands of hemp into rope. Other workers ran back and forth supplying hemp, and these workers had to jump over the twisting ropes. Workers taking a break may have turned this necessity into a competitive game.
So why is it called “Double Dutch” and not “Double Phoenician?” English settlers supposedly coined the term when they saw Dutch children turning and jumping in New Amsterdam (soon to be New York).

Somehow or other, whether it came from Egypt, China or Mars, kids in Europe started jumping rope, and we see drawings of this from about 1600 on. It was established enough as a form of exercise that, as I mentioned in an earlier post, it was suggested in early 1800s servants’ guidebooks that a governess should incorporate it into the exercise of her pupils. And as seen in the picture above, The Girl’s Own Book, a collection of games and activities for girls first published in 1834, gives instruction for jumping rope (as well as engraving eggshells)

In the 20th Century, Double Dutch became very popular in urban America because it could practiced in a street or alley that didn’t have enough room for other sports, and it incorporated creativity and music, with turners and jumpers chanting their own rhymes and rhythms to go along with each jump.
After a while it was replaced by other sports, or non-sports involving video screens.

However, during the fitness crazes of the 1970s, new competitive forms of the sport emerged. Police in New York teamed up with physical education teachers to create a competitive form of Double Dutch that became wildly popular throughout the city and eventually evolved into the National Double Dutch League. Elsewhere, jump rope teams began forming in schools, churches and other organizations. By the 1990s, these teams were competing against one another at national and international competitions. We’ll learn more about what those teams do in a future blog post.
But meanwhile, back to the Chinese, who may or may not have invented the sport. While the Dutch get the credit for one form of jumping, the Chinese receive credit for another form. This involves two jumpers and two individual sized ropes. The ropes are crossed and the jumpers each hold one handle of each rope. Then they rotate the ropes so that they turn at opposite times. The Chinese introduced this form of jumping at a world competition, and it has been known ever since as “Chinese Wheel.”