Continuing with my March series about all things Irish – here’s where the luck of the Irish runs out:  the coffin ships. 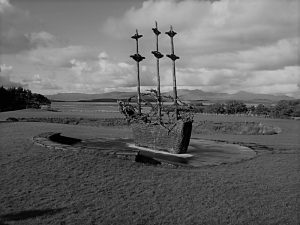 I’ve always been of the opinion that the Irish and English are not nearly as different as they believe themselves to be. And I’m not sure how much of the suffering from the potato famine can legitimately be blamed on the English. But there are a few instances where that blame seems pretty clear, and one instance is the coffin ships that brought Irish emigrants across the Atlantic during the famine years.In 1847*, as the famine continued into its second year with no end in sight, officials in America braced themselves for another record influx of immigrants from Ireland. For the immigrants’ own safety, the U.S. passed laws limiting the number of passengers that could be carried by each ship based on its size.

Britain had a similar law, but it allowed 50% more passengers in the same amount of space. So it became much less expensive to travel to British North America, the name by which Canada was known at the time. (The passenger limits were difficult to enforce, but the captains were unwilling to risk the stiff fines in the United States and there are documented cases of them dumping passengers back on the beach in Ireland when they realized they were carrying more than allowed.)

More emigrants began to head to Canada—whether they wanted to or not. It was not always a matter of the emigrants trying to save money on passage. Like convicts, they were often involuntarily shipped overseas.

Some landlords sent only the tenants who volunteered to leave. But often those volunteers were also the most healthy, able workers. So other landlords started simply evicting tenants they didn’t want, and since those evicted usually had no place else to go, they accepted the “offer” to emigrate across the Atlantic.

There is debate about whether the landlords were helping or hurting these tenants. Certainly many were grateful for the chance to escape the horrors of famine and start over in a new land. But others saw the landlord emigration as a death sentence. Robert Whyte, a passenger who traveled to Quebec in 1847, recorded in his journal the feelings of a man from Meath whose wife died from fever while waiting to disembark in Canada. He swore on his wife’s grave that as soon as he earned the price of passage back to Ireland, he would “go back and shoot the man that murdered you, and that’s the landlord.”

So why were the landlords considered murderers for helping their tenants escape starvation at home? It was a combination of selecting emigrants who were too weak to travel, not providing food or clothing for the North Atlantic voyage, and overcrowding the tenants onto ships without ventilation or sanitation.

Typhus spread like wildfire among the ships making the crossing. During a two-week period during 1847, the quarantine center in Quebec at Grosse Isle (built to hold 150 patients) was overwhelmed with 850 patients and there were 500 more held on shipboard, waiting for admission. And on top of that,  another 13,000 immigrants on 36 additional ships remained on board in overcrowded conditions waiting for their medical inspections.

These were the coffin ships. Seems like I should be writing this in anticipation of Halloween, instead of St. Patick’s Day, doesn’t it?

*1847 became known as “Black ’47” because of the staggering number of deaths and evictions in Ireland that year. My great grandfather arrived in the U.S. from Ireland in 1848, but we don’t know whether he choose to emigrate and whether he came through Canada.  At some point, I plan to write about the immigrant experience. My book Restitution features an Irish immigrant who decides to side with the patriots in the days leading up to the American revolution. I think some of his motivation to rebel probably stems from his resentment of the English, but I’m not sure he would admit it.

Most of the information in this article comes from The Famine Ships by Edward Laxton (Holt 1998) and Five Points by Tyler Anbinder (Plume/Penguin 2001).  The photo shows the National Famine Memorial in County Mayo.