Americans are getting ready to celebrate the 4th of July with parties, food and fireworks.  This year marks the 240th anniversary of the signing of a document in which we declared ourselves to be an independent nation.  And we will  wave our flags and think that the 4th of July in 1776 must have been a pretty great day.

But it wasn’t. The delegates in Philadelphia actually adopted the Declaration of Independence on July 2, but the news didn’t reach George Washington and his army in New York City until July 6. Unfortunately, the British navy had arrived a week before that, throwing the city into a panic. 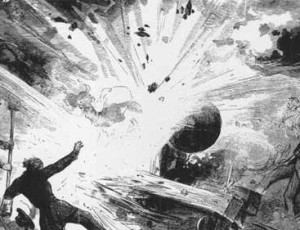 So many ships arrived in such a short period of time that one Pennsylvania soldier said their masts looked like trees in a forest.  The streets of the city were jammed with families trying to leave while militia members from surrounding regions were trying to come to join in the city’s defense.

George Washington could not have been resting easy. Only a few weeks before, he’d learned of a loyalist plot to assassinate him and his officers when the British fleet arrived in New York.  Those arrested for involvement in the plot included the city’s mayor and two members of his Life Guard.  Alarm guns fired frequently in the city, perhaps reminding him that just five of the 120 British ships at anchor carried more firepower than all of the American guns along the shore. And they carried 10,000 troops, with thousands more expected daily.

The announcement that the Continental Congress signed the Declaration of Independence did inspire celebrations in the streets and at least one officer reported that he and his cohorts spent the afternoon “merrily.” And it must have been reassuring to know that the governing members of the colonies were now publicly committed to a course of action that would be punished as treason if they failed. It was all or nothing, and they were all in it together.  As Benjamin Franklin famously summed it up, “We must, indeed, all hang together, or most assuredly we shall all hang separately.”

Washington received a copy of the Declaration  on July 8 and had it read aloud in the city at 6 p.m. the next evening. Afterwards, swarms of people marched out to tear down a giant statue of King George III, hack off the statue’s head, cut off his nose and mount what was left of the head on a spike in front of a tavern.  Lead from the statue would  later be melted down into musket balls.

But the celebrations didn’t last long. Within three days, British ships brazenly sailed up the Hudson River and while American gun crews fired furiously all day, the ships suffered no harm and the only casualties were six Americans killed when their cannon blew up due to their own mismanagement.  More ships followed, and soon the British had a comfortable base on Staten Island.

To the British, the Declaration of Independence was a joke. The British admiral’s secretary said the document revealed “the villainy and the madness of these deluded people.”

Ships and troops continued to arrive throughout the summer until the end of August when the British attacked and defeated Washington’s army in the largest battle fought on North American soil up to that time. While Washington and his men were able to elude capture, they suffered a series of defeats and were chased out of New York.

Seven years of brutal fighting would follow before the Treaty of Paris ended the war in 1783.

So this year when we wave our flags and head out to parties to celebrate our nation, let’s be glad that “bombs bursting in air” above us are decorative amusements and not weapons designed to destroy. And let’s drink a toast to our forefathers who were willing to set aside their differences to “hang together.” We could use a little of that right now.

Much of the information in this article comes from 1776 by David McCullough.

I honestly believe most people chose sides not for personal gain but because they believed they were doing what was best for the American colonies. Of course, some people did view the conflict as an opportunity to increase their power and wealth. I tried to explore all of these motives in my book, Restitution, which is set in Maryland in 1774.