Smallwood’s House is Now a Retreat for Us

Smallwood’s Retreat sounds like a battle maneuver, but it’s actually the name of the historic house in Charles County. We discovered the house while we were camping in a park named (not surprisingly) Smallwood after the original owner of the property. General William Smallwood was the highest ranking Maryland general during the Revolutionary War. I’d never heard of him. 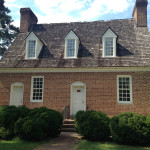 We came across the red brick house while hiking the “Generals Walk” which was the only real trail in the park. (And when I say “hiking,” I’m making it sound more adventurous than it was, but when you walk two miles on a path that isn’t paved I think you get to call it “hiking” without cheating too badly.) Smallwood’s Retreat is not a large house, but the brickwork is quite handsome. It of course wasn’t open when we walked up. But we asked about it at the park office and were told it might be open on Sunday.

We didn’t get our hopes up. But on Sunday as we were hoisting the canoe onto the car, a member of the park staff drove up to our campsite. We immediately wondered what we’d done wrong. (Actually I didn’t wonder—I was thinking of the empty beer bottles in our screen tent. Maryland State parks don’t allow alcohol and I thought we were busted.) But it turns out we weren’t in trouble after all. (Well, now we will be since I just confessed to a crime.) 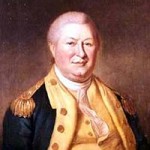 “Are you the ones who wanted to see the Smallwood House?” she asked. “I’ve been driving all over trying to find you. The house is open now.”

Well, that was unexpected service. So the canoe had to wait while we headed over to Smallwood’s Retreat.

General William Smallwood commanded the Maryland battalion during the Revolutionary War. Not long after the war ended, his neighbors elected him Congress and at the same time, the Maryland General Assembly offered him the position of governor. He took the latter job and served for three years before returning to his Retreat to manage his estate and help restore his church.

While he was pretty good at serving his country, he was not so good at managing his finances. Like many southern planters, he mortgaged future crops to fund the current year’s production on the plantation. When he died, he was so heavily in debt that his dwindling estate was sold to pay off the creditors. 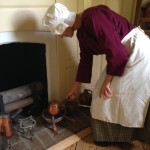 And I know this because the reenactor who gave us the tour of the small house also offered to give me a 30-page book on Smallwood when she saw that I was interested enough to ask questions.

What I thought was the most wonderful part of the tour was that at the end we learned that our guide was a collateral descendant of the general.

The other thing that struck me was the general’s portrait. While he was described by teen journalist Sally Wister as “tall…well made” with a “truly martial air,” I don’t think he considered himself attractive by any means. He ordered his portrait artist to “make me look more like George Washington,” the rock star of the day. 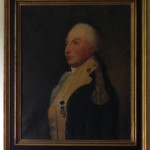 Compare this portrait to the one above. I think the artist succeeded in making Smallwood look like commanding officer

Smallwood’s Retreat was rebuilt from ruins in 1958 so the inside is only a conjecture as to layout of the rooms. I liked the “warming room,” which is not often seen in 18th C houses but probably existed in many of them as a place to reheat dishes brought in from the separate kitchen building. And the fact that Debbie Sharek, the woman posing for a picture in the warming room, is related to the original owner was probably the most charming feature of all.

The site advertises itself as being “40 minutes south of Washington,” but I think you’d have to drive in the middle of the night to make it there that fast. While it’s not worth driving hours to see, it was interesting and makes a good side trip while visiting other sites like Mallows Bay and Port Tobacco. Plus, the countryside is so quiet and removed from the congestion of DC that it feels like you’ve traveled to a truly distant place or even another time. Smallwood’s Retreat is still a retreat, but now it’s open to all.

If you enjoy visiting 18th Century sites and learning about colonial history, check out my book Restitution, which explores some of the feelings and activities associated with the beginning of the Revolution in Maryland. To learn more about the parking and camping options, visit http://dnr2.maryland.gov/publiclands/Pages/southern/smallwood.aspx.