Halloween decorations often include rats – all fake, fortunately. While I love the “Dead Mouse Theater” commercials, I don’t think I’d want to see Dead Rat Theater, at least not up close. Those long slimy-looking tails creep me out. And I’m not alone – rats are almost universally feared and hated. 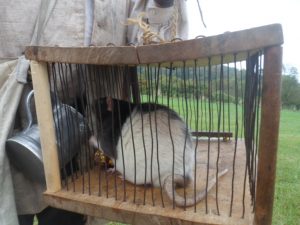 So I can’t say I was too excited when the itinerant rat-catcher at Jerusalem Mill proposed to marry to my sixteen-year-old daughter. On the other hand, she likes to hang around with laundry thieves, so I suppose she could do worse.

The rat catcher, “Silas Moore,” was a reenactor at the Colonial Craftstman Weekend portraying a profession that has changed but not disappeared.(These days they are called “exterminators” or “animal control professionals” and we pay them with credit cards.) Two hundred or more years ago, a rat catcher might be employed by a town or by the owner of a business or home. At least in the medieval period (i.e., the time of the Pied Piper legend) the occupation was supposedly considered rather respectable but dangerous, due to infections from rat bites. In the days before antibiotics, infected bites could easily prove fatal, and many considered rats to be poisonous.

To help in their work, rat catchers often used ferrets to find the rats (or “ferret them out”) and dogs to hunt them down.  By the Victorian era, rat catching was a regular occupation in cities like London and one practitioner, Jack Black, became famous for his exploits as “Rat Catcher to Queen Victoria.” He would sometimes set up a cart decorated with pictures of rats and give public demonstrations of how quickly his rat poison worked. Other times he would pull handfuls of rats of their cages and allow them to run all over his body, to the horror of female onlookers.

Silas Moore was not quite this ostentatious. He did, however, carry a cage with a sample of his catching ability (which a very healthy specimen named Wilson), and offered to sell us rat meat for our dinner. He even handed me a “good” recipe for rat stew. The first step in making the stew is to “wipe rate with vinegar cloth.” Silas explained that the vinegar will clean off the lice and other vermin. However, I forgot to ask him if we were supposed to do this before or after we skinned the rat.

Actually, the recipe says nothing about skinning the rat at all, so maybe, like with chicken, the skin is the “best part.”

The rest of the recipe is fairly standard. After disjointing the rat into serving pieces, it should be browned in butter with onion and then stewed in a kettle with potato, carrots and a little flour and water. Cooking time varies “depending on the age of the rat.” 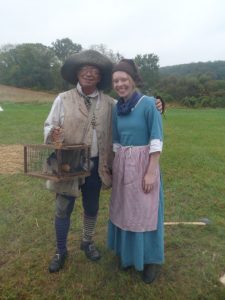 We had already brought our own provisions for dinner so we declined Silas Moore’s offer to sell us rat meat. But maybe we should have tried it. Jack Black insisted that rat meat was “moist as rabbits, and quite as nice.” Of course, there are a number of questions we should have asked before buying the meat. After all, we may be reenacting an earlier age, but we live most of our lives in 2014 and consumers need to know a lot more information. For example, is rat meat high in cholesterol? Was the rat fed any steroids or growth hormones? And was it a free range rat? Next time I will suggest that the rat catcher update his marketing materials.

One final note – the profession is always called “rat-catcher” rather than “rat killer.” That’s because the rats were often sold to the proprietors of establishments that featured rat-baiting matches. Gambling men would gather to wager not on fights between rats, but to bet on which dog could destroy the most rats in the shortest amount of time. By the end of the 19th Century, rat-baiting was outlawed because it was said to be cruel–to the dogs.

So rats get no respect and no love. But do they need either? After all, fear is pretty powerful. And the resourceful creatures are with us as much today as ever.

There’s a scary thought for Halloween!

While we now associate scary tales with Halloween, our ancestors used to tell scary stories all throughout the dark winter months, especially at Christmas. My scary tale is Bride of Belznickel, about a girl who makes up stories about the Christmas demon and finds that her stories are starting to come to life.