Royal Funerals in Regency England: Private Affairs at the End of Public Lives

The recent funeral of Queen Elizabeth II broke with a 300-year-old British tradition started by George III. His predecessor and grandfather, George II had a large and public funeral at Westminster Abbey in 1760.

That would be the last time the 11th Century icon hosted the funeral for a reigning monarch until this month. George started a tradition aimed to give the royal family more privacy. When his brother William Henry, Duke of Gloucester and Edinburgh passed away in 1805, his son William Frederick wrote to the king and told him that his father had requested to be buried in a vault in the Free Chapel of St. George at Windsor Castle. George wrote back to his nephew to say that he would honor this request, and noted that it would change the funeral “from a public to a private one.” 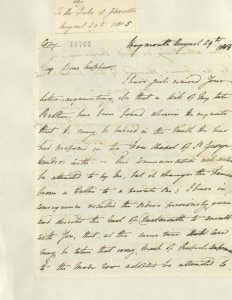 From that time on, royal funerals took place at Windsor. George buried his beloved youngest daughter, Princess Amelia there in 1810. Seven years later, the whole country plunged into mourning when George’s granddaughter, Princess Charlotte died in childbirth, along with her infant son. As heir apparent to the throne, she was hailed as a fresh hope by a population disgusted with the excesses of her father, the Prince Regent, and distressed by the increasing madness of her grandfather George III.

Even Americans felt the pain of this loss. Louisa Caton Hervey, granddaughter of Charles Carroll, was visiting England at the time and explained the “terrible affliction” felt by all the public at the loss. “We are all in the deepest mourning,” she noted. From a modern perspective, it is easy to imagine the shock and heartbreak would have been similar to public loss felt by the death of Princess Diana in 1997.

Though the funeral procession through London was majestic, the state funeral was held in the smaller venue at Windsor. 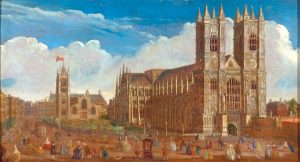 One year later, in 1818, George’s wife, Queen Charlotte died. Event planners at Windsor were starting to get pretty good at funerals. Minute details of the event were reported in European Magazine. The queen was laid to rest in a lead-lined coffin of Honduras mahogany, fitted with a mattress and cushion covered in white embossed silk and filled with spices.

Two years after that, the chapel at Windsor played host to the funeral for George III.

And so it continued until this month. While Queen Elizabeth still had a private burial at Windsor, her funeral was held in the larger venue of Westminster Abbey. I haven’t found a definitive answer as to why they choose to break with tradition. One account said that was the Queen’s wish. Whether she wanted to signal that her reign was a break from the past or simply to make it easier for more people to attend is something I can only guess at.

I wrote a series of three books set in 1816 and 1817. The series stops before the death of Princess Charlotte and the last book, Deceptive Behavior, involves people who live far out in the country, but I wonder if even they would have strongly felt the loss of the Princess Charlotte. I guess as the creator of these characters, I get to make that choice for myself, but sometimes I forget. Characters just take over after a while…