Rodent extortion and other ways to celebrate February 2: The History of Groundhog Day

Happy Cross Quarter Day!  It’s better known to most of us as Groundhog Day.

Today we celebrate the fact that we are halfway between Winter Solstice and the Spring Equinox. Okay,  in the age of electric lighting the Cross Quarter is not a big deal for most of us, but every day closer to summer is a victory in my book. Plus, back when people lived their lives by the cycle of the sun, it was really something worth celebrating. And what better way to celebrate than with large furry rodents? 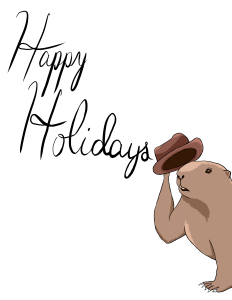 Groundhog Day itself seems to be an American tradition, but for centuries before Punxsutawney Phil made his debut, some Europeans celebrated this highlight in the calendar by watching bears, hedgehogs and badgers.  The legends say that if these animals see their shadows (i.e., it’s a sunny day) then we will have six more weeks of winter weather. If they don’t, then spring is supposed to start.  Germans brought these traditions with them to the United States, and of course Americans turned the idea into an opportunity for commercialism and extortion. During Prohibition, Punxsutawney Phil supposedly threatened everyone with 60 more weeks of winter if he couldn’t get a drink.

Another popular old festival from this time of year comes from the Romans, who celebrated the birth of their god Mars by parading through the streets with torches. Out of these pagan traditions, we ended up with Candlemas Day, which is supposed to commemorate the day of Jesus’s presentation in the temple in Jerusalem. People would bring in candles to be blessed for the year. They also made weather predictions such as the one in this popular English poem

“If Candlemas be fair and bright,
Winter has another flight.

If Candlemas brings clouds and rain,
Winter will not come again.”

Like many other church holidays, Candlemas was probably devised to justify continuing a popular pagan celebration. The appeal  of candles and torches is obvious at a time of year when we’re longing for more sunlight. The appeal of the animal weather forecasting doesn’t make quite as much sense, but then part of the tradition of Groundhog Day used to involve eating the groundhog after  it came out of hibernation, so a rodent feast could have spurred that part of the tradition.

Candlemas is known as el Día de la Candelaria in Spanish speaking countries, where celebrations can last as long as a week. Coming 40 days after Christmas, Candlemas marks the official end of the Christmas season. It also coincides with St. Brigid’s Day in Ireland, based on the pagan goddess Brigid whose feast was known is Imbolc.

So this holiday may have more names than other on the calendar. Pick one and celebrate, with or without rodents. Just don’t threaten me with any extra days of winter.

For some interesting stories about about Candlemas Day and all its permutations, check out http://episcopaldigitalnetwork.com/ens/2013/02/05/candlemas-and-dia-de-la-candelaria-shine-in-new-light/ http://amamariesimard.tripod.com/id16.html.

Candlemas Day marks the end of the Christmas season. If you like reading about old Christmas traditions (especially when they cause problems) you might enjoy my Regency Christmas stories like Bride of Belznickel or An Excuse for Poor Conduct.