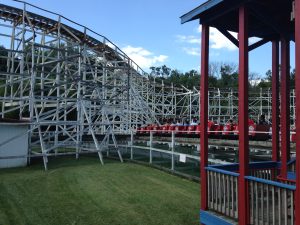 “The Wild One” roller coaster at Six Flags America in Maryland is celebrating its 100th birthday this year, which is pretty amazing. During the course of its history, the coaster has been partially rebuilt several times and even relocated nearly 500 miles from its original site. But it still retains the iconic silhouette that appears on a postcard from its earliest days.

When it was built in 1917, the “Giant Coaster,” as it was called at the time, was the tallest in the world with a initial summit stretching 98 feet into the sky. Although the speed back then may have been less than its current top speed of 60 miles per hour, it certainly was fast enough to wreak havoc on women’s fashions of the time.

Just think about it. While not as cumbersome as clothing from just a few years earlier, in 1917 women of all social classes wore full skirts, hats and gloves and many still wore long restrictive corsets, all of which could have made the prospect of squeezing into a roller coaster car quite unappealing.

Women might have been considered daredevils for even trying to ride. After all, safety regulations weren’t exactly stringent back then and some of the earlier coasters were ridiculously dangerous (and will therefore be the subject of a future blog!)

In 1917, the Giant Coaster hosted its first riders in Nantasket Beach, Massachusetts as the showpiece of an amusement venue known as Paragon Park. It was created by pioneering designer John A. Miller and then after suffering damage in a fire, the coaster was re-created in 1932 by another pioneer, Herbert Paul Schmeck.

After entertaining riders for three more decades, the coaster again suffered fire damage in 1963. While park owners wanted to rebuild the coaster to the same configuration, they decided the cost was too high and they opted to basically cut out the damaged parts of the track and shorten the ride. In another cost-saving move, they purchased trains from another damaged coaster called The Comet and used those on the Giant Coaster without even bothering to repaint the name on the cars.

Despite the attempts at thriftiness, financial troubles caused the park to close in 1984 and the Giant Coaster rolled to a stop. 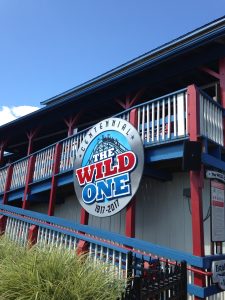 A small water park in Maryland made a surprise bid for the ride and won. Since the park was named, Wild World, they rechristened the coaster as the Wild One, rebuilt it to the earlier full-length design and opened it for business in 1986.

I had the distinct displeasure of riding the Wild One in 1989. The coaster rattled so badly I felt like all my bones had been shattered. We had no idea that The Wild One was so old, but honestly it seemed like the ride had shaken out all of its bolts and was liable to collapse at any moment.

Fortunately, the coaster is now in much better health. The park was sold to a bigger company in 1992 and eventually rebranded as Six Flags. In 1997, the tracks of the Wild One were reconfigured slightly to make room for a new water ride and this change raised the top speed of the coaster from 53 to 60 m.p.h.

Since 1997, that “new” water ride has been dismantled and replaced by another coaster. Other rides and park themes have come and gone, but the Wild One remains, offering a pretty smooth ride with lots of “air time.” 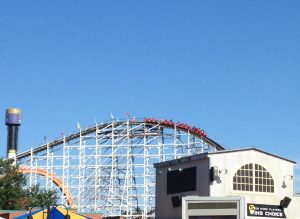 This year, a new logo on signs and the train cars celebrates the coaster’s century of service. In an entertainment industry where the hottest trend is soon obsolete and ready for replacement, a hundred year run is pretty impressive.

If you have the chance, take a ride on history this summer. The Wild One could be a museum artifact, but instead of looking at it behind glass, you can experience the ride just like thrill-seekers over 100 years ago. Opportunities like that don’t come along every day.

For more information about early roller coasters, visit the history section in Ultimaterollercoaster.com.

I have not yet featured a roller coaster in any of my books, but in my mystery Roped In, the heroine has an emotional breakdown while riding the kiddie train at the zoo. Fortunately, the train operator is kind enough to let her continue to ride until she calms down.