On February 14, many people in the Western world celebrate love and chocolate, so it can be a happy occasion. If you are lacking one or both of these causes for revelry, Valentine’s Day may not be such a great day. 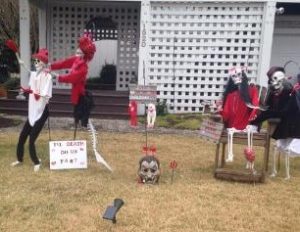 Rest assured, however, that you are not alone in your misery. February 14 has been a truly awful experience for many people in the past. In fact, it is recognized as the day St. Valentine was beheaded, so it seems like we should be celebrating the day with Halloween-type decorations rather than love messages. St. Valentine may not have even existed, however, so we can look beyond his misfortune for now and focus on some other awful events associated with his feast day.

Probably the most famous to those in the U.S. is the St. Valentine’s Day Massacre in Chicago in 1929. Pictures in the newspapers show the bloody bodies of seven gang members assassinated by men dressed as police. The identity of the assailants remains a mystery, although there are some plausible suspects. The killings were part of the power struggle between Irish gangs led by “Bugs” Moran and Italian mobsters under the control of Al Calpone. While the average person on the street may have reacted with horror and revulsion, the death of gang members likely did not evoke any more empathy from the public than gang killings do today nearly 100 years later.

On February 14 of 1943, American forces engaged in the Battle of Sidi Bou Zid in Tunisia, part of an engagement considered to constitute one of the worst American defeats of World War II at Kasserine Pass. Troops under the direction of German General Erwin Rommel (the “Desert Fox”) killed thousands of inexperienced U.S. soldiers and took hundreds of others as prisoners. That would have made a pretty wretched Valentine’s Day for many war brides. Fortunately, Allied commanders learned valuable lessons from the mistakes, which probably enabled a few more men to make it home for February 14, 1946.

More recently, on February 14, 2000, tornadoes ripped through south Georgia. Eighteen people were killed and more than 100 people suffered injuries. People lost their homes in Georgia and suffered property damage in six other states during the storms. Not a Happy Valentine’s Day for mobile home owners in those areas.

February 14 was also a deadly day in Beirut in 2005 when a terrorist bomb went off, killing nine people. Three years later, a former student at Northern Illinois University put on a shirt that said “terrorist” and went on a Valentine’s Day shooting spree at the college, killing five students before shooting himself.

So, this year, if you are not dealing with a deadly storm, terrorist attack, or a German Panzer division, your Valentine’s Day should be looking pretty good. February 14 can be a day where people in relationships feel like they’re not doing enough and people not in relationships feel like there’s something wrong with them. Remember, St. Valentine may or may not have sent someone a nice message, but he never insisted that February 14 should be a day to judge your love life. Say something nice to one person today that will be enough. And try to avoid acting like the neighbors in my picture.

Much of the information in this blog came from http://www.thepeoplehistory.com/february14th.html and, I must admit, several well-documented Wikipedia entries including https://en.wikipedia.org/wiki/Battle_of_Kasserine_Pass.
If you like reading about romance gone wrong, you might enjoy many of my books including the cozy mystery Worth its Weight in Old, the Regency romance Deceptive Behavior, or my pirate story Avery’s Treasure.