Potato, Patata–and Stay Away from Green Ones

I can believe that some people say “to-mah-to” but I always thought that when Ira Gershwin wrote “You like potato, and I like potahto,” in the classic tune “Let’s Call the Whole Thing Off,” he was just being lazy with his rhyme scheme.
Turns out he was being historically accurate. Sort of.
Potatoes were introduced into European culture by the Spanish, who discovered the crop in Peru. They called it the “patata” (maybe to go with the “tomata”). In any case, they still use the word, so the Gershwin lyric holds up. I’m sure you find that a relief! 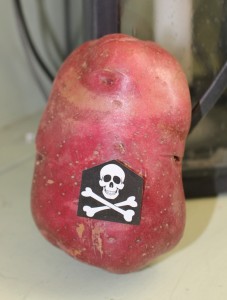 But you should call the whole thing off if the potato is green. That’s because green potatoes are loaded with a poisonous substancen known as solanine. It’s a bitter-tasting chemical found in the leaves, stems and shoots of potatoes, and it protects the plants from being devoured by insects. When potato tubers (the part we eat) are exposed to light while growing, they turn green and fill with solanine as a means of protection. But what protects the plant is harmful to anyone who consumes it. Fortunately, because of the bitter taste, most people stop before they eat enough to cause major problems. But solanine poisoning can cause nausea, diarrhea, vomiting, stomach cramps, cardiac dysrhythmia, nightmares, hallucinations, paralysis, fever, jaundice, hypothermia and even death. Obviously this is rare, and it tends to happen only in places where famine is so severe that people are willing to eat something that tastes as bad as a solanine-infused potato.
And this made me think of the Irish potato famine. From 1845 until 1851, starvation caused by the repeated failure of the potato crop caused death of a million people in Ireland. I imagine those people would have been tempted to eat green potatoes, so I wondered if solanine played any part in the deaths. I haven’t been able to find any connection so far, and from the descriptions of the blight that ruined the crops, I imagine the potatoes turned to black mush before they had the chance to turn green.
It’s a pretty depressing topic for contemplation, and if you’d like to feel even worse, there’s a miserably informative series of articles about the famine starting here: http://www.historyplace.com/worldhistory/famine/introduction.htm
After reading about the devastating blight and the “relief” measures that pretty much succeeded in destroying whatever the potato fungus left behind, you might want to have a drink to forget your troubles.
It’s okay if your beer is green. But only on March 17. Happy St. Patrick’s Day!