Political worries come back to haunt us

“This country has reached a very alarming crisis. Torn by two parties…Congress enacting laws it is unable to enforce …only to substitute equally bad ones…”
Sound familiar? I’m know I’m not alone in finding the factionalism in the United States to be frightening, but it comforts me to know that this worry is not unique in time. 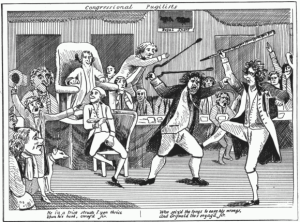 The words above were written by Rosalie Stier Calvert in 1809. Like me, Rosalie is a mother who did most of her work from home in suburban Maryland. But while I would put myself in the “average” category in many areas, Rosalie would fit into the “Real Housewives of Beverly Hills” category. She was born into a wealthy European family who fled to the United States in 1794 to escape the Reign of Terror. Though they had to leave behind the family castle, townhouse and other property, they brought enough gold to ensure they could live like nobility. Rosalie did not much care for her new home. After a few months, she wrote “America displeases me more and more every day–you meet only scoundrels.”
But eventually she got to the right parties and her attitude changed almost overnight. In a letter to her brother, she urges him to bring dancing clothes and a pair of dueling pistols. “Since I have been to several parties,” she explains, “and I plan on going to more…some idiot might play court to me. And you should know that occasionally …when a young lady refuses a man, he duels with her brother to console herself.” She goes on to describe the fights that sometimes include fathers as well as brothers: “either they break each other’s heads politely in the English manner or they shoot off each other’s pigtails with pistols. Isn’t that quaint?”

Within a couple of years, the young lady who joked about suitors shooting at each other married George Calvert who was related to both the Lords Baltimore and George Washington–about as close as you could get to aristocracy in America. She and her husband eventually settled on Riversdale plantation near the town of Bladensburg (now part of the District of Columbia) while the rest of her family returned to Europe. All these years later, no one outside of her family would probably know a thing about her if she hadn’t left behind a collection of letters. These letters give a detailed portrait of life in the early 1800s and are filled with depictions of everyday events –for the wealthy.

Each account is a jumble of family news, political commentary, local gossip and complaints or boasts about the domestic productivity of the plantation. Illness is a constant theme –nearly every letter contains a report of a death or near-death experience. Even though Rosalie was rich and had scores of servants and slaves, she rose before sunrise each day and did a fair amount of work, overseeing the dairy, keeping records, teaching her children and sewing clothing. Of course, she also had time to take strolls in the garden, read romance novels and write all those letters, so she didn’t have to work nearly as hard as most women of the day.

It’s reassuring to read to her letters and see that some things never change. We worry about our children. We worry about the government. We worry that we have too much work and not enough time. These concerns hang in the air along with the oxygen we breath and they will always be with us. We just have to make sure to exhale them and not keep the poisonous worries inside where they will slowly kill us.

In the meantime, we can reflect on the things that have changed. Every time a family member has a slight fever, it never occurs to me that it might become fatal. If I’m separated from a family members, I can pick up a phone and talk to them in an instant. All of Rosalie’s money and prestige could not protect her family from deadly disease or enable her to visit her family an ocean away.
She died of congestive heart failure at age 43, eight years younger than I am now. None of us know how much time we have in this life. Worry can be helpful if it spurs us to action, but beyond that, it’s not a good use of that most valuable resource. So you can “worry that this country has reached an alarming crisis.” But then put your worry aside and go do something.

Thanks to “Global News from a State College Perspective” for providing the political cartoon showing members of Congress fighting and reminding us that deep enmity in politics is nothing new. For a quick historical summary of political parties in the U.S., visit https://sites.psu.edu/clb5923/2015/02/12/history-of-smaller-political-parties-civic-issues-2/.

If you’re more interested in the domestic issues of the past, my books Langley’s Choice and Deceptive Behavior deal with housekeeping in the early 18th and 19th Centuries, respectively. And my book Restitution deals with housekeeping AND a little bit of political theory and revolution.  Of course, to get this all right from the source, read Mistress of Riversdale: The Plantation Letters of Rosalie Stier Calvert 1795-1821.