Painted Stones on Dead Eyes in GOT – Did Anybody Do That?

I like to look for historical corollaries in the admittedly not historical Game of Thrones books and TV adaptation.  So the creepy eye stones placed on bodies lying in state have intrigued me. Did any real cultures ever follow this practice? 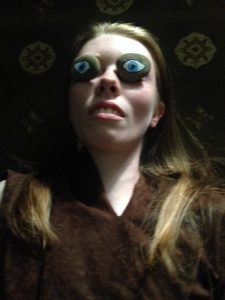 It makes sense for people who believe in an afterlife, such as the ancient Egyptians who packed their tombs with everything from a picnic lunch to jewelry and personal transportation devices to be enjoyed in the hereafter. Placing the “open” eye decorations on the face of the dead allows them to see what’s coming in the next world and reminds the living left behind that death in this life is only the beginning of another journey.

Uplifting and beautiful in theory, if a little creepy looking. So, did George R.R. Martin make this up entirely? Did other cultures follow this practice?

I haven’t been able to find a clear answer. Modern undertakers report that because eyeballs tend to deflate after death, they put fake eyeballs in place before viewings so the facial contours look correct. In medieval times, they supposedly fulfilled the same function with rocks. But those would have been put under the eyelid and not given the vivid open eye effect we see in Game of Thrones. 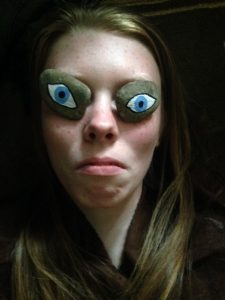 The practice of placing objects of weight on the eyes of the deceased to keep them closed is common, of course, and at least one person has suggested that those painted rocks in Game of Thrones cover up telltale signs of movement in the eyes of actors who are only pretending to be dead.

In Greek mythology, coins on the eyes of the dead could be used to pay the ferryman who conducted souls across the River Styx into Hades. However, those coins were more often placed in the mouths of the deceased, perhaps so the Charon the ferryman could not take them until after they reached the final destination.

Many cultures continued this practice until relatively recently. Half dollars were placed on President Lincoln’s eyes as he lay in state.  Those coins are in the hands of collectors now, though, so he was not buried with them. He may have had to barter something to cover the the ferryman’s fee. 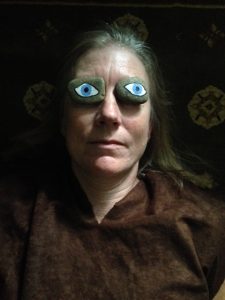 If anyone comes across evidence of the painted rocks on the eyes of the dead as in Game of Thrones, I would love to hear about it. In the meantime, if you happen to be buried with pennies over your eyes, be sure to take George Harrison’s advice and declare them for income tax purposes. Then maybe you can deduct the taxes from the amount you pay the ferryman. Just don’t pay him until he gets you to the other side. ___________________________

The ancient Egyptians probably had some of the most interesting death rituals of the cultures we’ve uncovered so far. You can learn a bit about them here: https://www.nationalgeographic.com/archaeology-and-history/magazine/2016/01-02/egypt-book-of-the-dead/

I don’t have much about death rituals in any of my books, but if you like stories about the power of superstition, you might enjoy my novella “Bride of Belznickel” about a young woman who tells ghost stories that start to come to life.

When my daughter and I tried making our own eye rocks, we discovered it is really hard to get them to stay in place. We could have used some kind of adhesive, but it felt weird enough having them in place without having them glued there, so we settled for poor rock alignment instead.