The sad story behind the Great American Road Map

As travelers prepare to hit the road for Memorial Day weekend, I thought I’d reflect on what we no longer need—a road map. Those of us who haven’t memorized the route we’ll be taking will rely on GPS to figure out how to get from home to Vacation Central and back again. The really old-fashioned among us may resort to directions from MapQuest. But virtually no one will pull out an atlas or unfold one of those crazy impossible-to-refold roap maps that still lurk in random glove compartments.

And that’s a shame, really, because the road map was a wonderful invention and absolutely essential to American travel for about 200 years. But it didn’t start out that way.

The first American road map was created by Christopher P. Colles, an engineer and visionary from Ireland who came to the colonies shortly before the American Revolution.  Using studies he created while serving in the army as well as other military surveys and additional surveys undertaken on his own for his new project, Colles produced the Survey of the Roads of the United States of America in 1789. 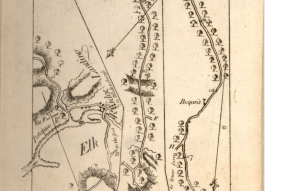 The survey was a series of road maps highlighting major roads, waterways, crossings and landmarks between New England and Virginia. To make it easy for travelers to purchase his map collection, he offered to sell only the strips of map that they needed for their particular journey.

Like most of Colles’s ideas, including industrial steam engines, solar microscopes and extensive canal networks, the atlas was an idea ahead of its time. No one bought it.

Though the venture proved a financial failure, because of the survey’s technical merits, Colles launched an expanded version in 1794 which was intended to expand the survey to include the entire globe.  But he found few subscribers for this scheme and eventually moved on to other projects including an optical telegraph system that was used to keep New York City safe from British attacks during the War of 1812. He died a few years later in obscurity, attributing his continual financial failures as “bad luck.” In f

act, he once lamented to a friend,  “Had I been brought up a hatter, people would have come into the world without heads.”

He had the outstanding misfortune to be so far ahead of his time that despite meticulous planning, his brilliant ideas were impractical, meaning that that no one felt like paying for them.

But they sure did later. Rand McNally introduced a line of road maps in 1904 and within a few years received major backing from the petroleum industry. Gasoline stations began handing out free maps to encourage people to drive more and use more of their products. The free maps lasted until the 1970s,when gas stations suddenly found themselves needing to curtail rather than promote the sale of their products. Then state tourism agencies picked up the slack and handed out their own maps to encourage people to visit their attractions. But now maps are becoming a rarity once again as we turn to GPS.

It would interesting to know what Colles would propose that we use next to navigate our journeys.

Page from Survey of the Roads of the United States of America courtesy of the U.S. Library of Congress.