Origin of Renaisance Festival is Far from the Renaissance

You know you’re a true history geek when you want to know about the history of a fake historical thing. Last year, I researched the history of fanciful tiki culture and this year, I started wondering about the origin of the Renaissance festival. 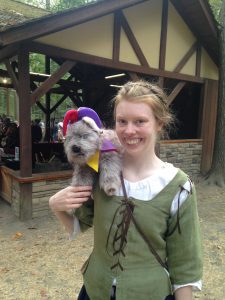 Yes, the origin of the Renaissance festival should be the Renaissance, shouldn’t it? But even the most diehard Ren Fest fan would admit that the modern fairs have little in common with anything experienced by anyone in the 16th Century. (Could you imagine the advertising if they did? “Joineth us for a day of feasting on moldy cheese and weak third ale while thou watchest noble men-at-arms trample thy crops and destroy thy livelihood!”)

Humans have a tendency to look back on earlier eras as the good old days and they try to recapture the glory with throwback fashion trends and stories set in the romanticized past. Early in the 19th Century, while horses still powered primary modes of transportation and the glare of electric lighting was yet unknown, nostalgic English aristocrats were staging reenactments of medieval jousts. But these are not quite the origin of the American-style Renaissance Festival.

Historical reenactments are intended to educate modern visitors about the past. Although various Ren Fest organizers disagree slightly on the degree of authenticity they strive for, most will admit the goal is entertainment more than enlightenment. Anachronisms are not only allowed but even encouraged at times. The Maryland Renaissance Festival, for instance, hosts a “Day of Wrong” where participants are notorious for dressing in costumes that “mashup” themes. One year, I saw an entire squadron of Star Wars storm troopers—all wearing kilts.

Many trace the history of Ren Fests back to the mid-1960s in California, about the same time and place the Society for Creative Anachronism (SCA) formed. While the SCA holds events for members who dress in historical garb and participate in pseudo-historical activities, Renaissance Festivals host events open to the public. Some Ren Fest attendees dress in costumes so magnificent that the festival should pay them to attend. Others wouldn’t be caught dead in anything other than their regular wardrobe. All are equally welcome as long as they spend money.

In 1963, schoolteacher Phyllis Patterson staged a small fair with her class, and then teamed up with a radio station to hold a larger event as a fundraiser for the station. They drew 8,000 people in one weekend. The trend caught on, and within little more than a decade, Renaissance Festivals were being staged throughout the country. That means the Ren Fest concept has been around almost 60 years, which seems like a long period and at the same time, woefully brief.

Historical reenactments are popular in Europe, but the American version of an ancient European festival has recently started to catch on there. That is sort of like serving frozen pizza in Italy. Still, even if the Renaissance Festival features King Henry VIII walking next to the Stay Puft Marshmallow Man flanked by a squadron of Scotticized storm troopers, it gives attendees the sensation that they are definitely not in Kansas anymore, and that the world has not always been the way that it is now. Looking back to see how lifestyles change while people remain the same is what makes history so fascinating. 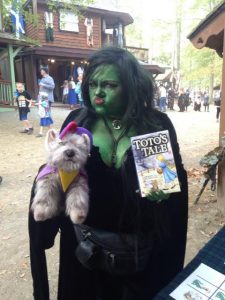 For all those participating in Ren Fest activities this season, best wishes for good weather! Meg and I will be at the Maryland Ren Fest on September 18 signing copies of Toto’s Tale at the Page After Page bookshop. Although I’ve written a number of stories with historical settings, it was our version of the Wizard of Oz that captured the attention of curators who are always looking for unique finds to add to their collection. Our book is in their “Alternative Fantasy” section, which gives you an idea of how this event differs from a historical reenactment. However, the shop also features a big collection of history books as well.