Expectations were low as we headed to historic Wateloo Village in northwest New Jersey. Even so, when we first arrived, it appeared that those sea-level expectations were too high. 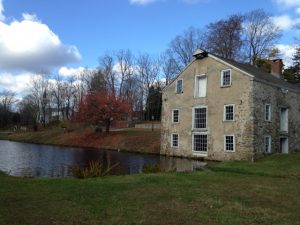 The 19th Century canal town is now owned by the state of New Jersey and all appearances indicated that the place had been converted to a venue for boutique weddings. There were several decidedly non-historic buildings set up for cocktail receptions and other rental uses. Signs told us where to drop of guests but not where to find a visitor’s center. Just as I announced this observation to my husband, he pointed out an old clapboard building with a visitor’s center sign in front.

“It doesn’t look open though,” I observed right before he walked through the open door.

Rarely am I so happy to be wrong! It turns out there is a lot to see in Waterloo Village and guides who are very enthusiastic to tell you about it.

Although there was an iron forge and some settlement in the area in colonial days, Waterloo Village really grew when the entrepreneur John Smith realized in the late 1820s that the site near the banks of the Musconetcong River would be the perfect place to set up a store. The Morris Canal was scheduled to open soon and the site would be one of the stops where boats would be raised to a higher elevation on an inclined plane. So naturally crews would want to buy supplies while they waited.

Within a short time, Waterloo was a thriving village with a gristmill, sawmill, hotel, and other businesses. The Smiths grew wealthy, but their dynasty was not meant to last. The coming of the railroad made the canal gradually less profitable. The Smith’s final attempt to save the family fortune required an investment a project that would tear down all the old buildings and create a housing development on the site. Unfortunately for them and fortunately for us, they timed this venture right for the start of the Great Depression. By 1931, the money and the Smiths were gone but the old buildings remained. 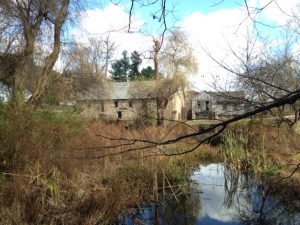 The village was threatened by a plan to turn the area into reservoir which would have covered the entire site with water. But that plan was scrapped by the state.
According to park guides, what kept the village from falling apart after the canal closed was the proximity of the railroad, but not because of paying customers. Instead, “hobos” who rode the rails used the village buildings as overnight accommodations. The steep grade of the hills on the nearby Lackawanna railroad slowed freight trains down enough to make it the perfect entry and exit point for unofficial passengers. Throughout the 1930s and 40s, itinerant rail riders kept the buildings in decent repair, fixing holes in roofs and other problems.

In the 1960s, efforts cultural entrepreneurs launched an effort to “restore” the village and open it as a tourist attraction. Although not necessarily accurate (they tried to make everything “colonial” despite the fact that most of the village was constructed during the Victorian era) Waterloo Village thrived and also developed as a popular concert venue.

Some unwise and likely unethical dealings from the leadership of the foundation that operated Waterloo village lead to closure in 2006. Once again, the buildings began to deteriorate. The state owned the property but not the buildings, so nothing was done to preserve them.

But the old village refused to die. Eventually, the government gained full control of the property and started stabilizing buildings and opening the site for tours. Dedicated guides like the woman who took us through the village regularly lead programs for visiting school groups in the village and a facsimile native American Lenape village at the bottom of the hill.

Gradually, they are bringing the place back to life, although in a different way. While the village will never again boast a great number of residents and volumes of commercial traffic, there are a few residents in restored buildings and there is a steady traffic in educational and nuptial traffic. And the village hosts a few lucky tourists like us who happen to stop in are treated to stories of the past in a beautiful setting. 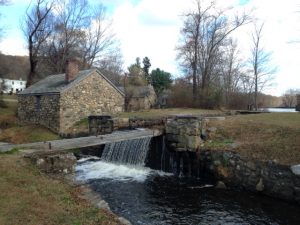 After our morning at Waterloo village we headed across the street to the Allamuchy Mountain State Park and walked a trail along the old railroad bed surrounded by gurgling streams, waterfalls and dramatic rock formations. Total cost for a beautiful day’s entertainment? $0. (We did make a donation at the village, but it is not required) So both are highly recommended stops, whether you are looking for destination or just a quick stop on your way down the road.

A final note about the Morris Canal.

Unlike industrial canals such as the Augusta Canal constructed for water power, the Morris Canal was built to transport freight, primarily coal. Mules walking on paths beside the canal pulled the boats just like on the more famous Erie Canal. However, the Morris canal traversed much greater changed in elevation. The 107-mile canal had to overcome more than 1600 feet of increase and decrease in elevation from start to finish. To accomplish this engineering feat, canal operators used a series of 23 inclined planes as well as 34 traditional locks. The water-powered planes, which put the canal boats on tracks like a ride at an amusement park, could raise boats 100 feet in one short stretch. 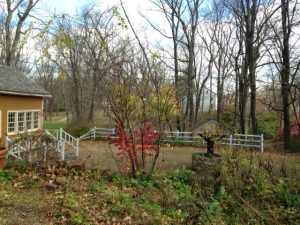 Today, only small sections of the canal remain visible, although much of the area has been incorporated into parks. The Canal Society of New Jersey provides some great information and photos on their website https://canalsocietynj.org/canal-history/morris-canal/

If you enjoy reading about the challenges of travel in the days before mechanized transportation, you might like my historical novels Restitution, Avery’s Treasure, and Langley’s Choice.
Thanks for reading!