Before St. Patrick – Did the Irish Worship the Sun?

The loss of the sun in the morning due to Daylight Savings Time irritates me beyond belief. I can’t imagine living in a world without electricity, candles or even oil lamps, when the darkness of night was relieved only a distant fire or tiny points of light high up in the heavens.  As the source of light, heat and growth—life itself—the sun must have been everything to many people in the prehistoric world. 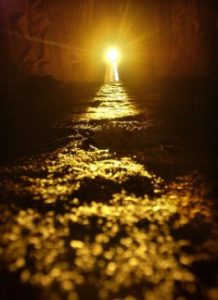 In Ireland in about 3200 B.C., long before St. Patrick, even hundreds of years before the construction of the Great Pyramids of Giza, Neolithic tribes built monuments to pay homage to the sun. Newgrange is the most famous of these and it consists of a circular mound more than 90 yards in diameter and about 15 yards tall. Though large from the outside, the quarters on the inside are close, consisting of a narrow passage a little over 20 yards long which leads in to a small center chamber.  Above the entrance to the passage, there is a small box shaped opening which allows sunlight to illuminate the inner chamber during the very shortest few days of the year at the winter solstice. For more than 5000 years, the inner chamber at Newgrange has marked the passing of each year with about 17 minutes of sunlight.

Unfortunately, Irish weather is not known for an abundance of sun, so even during the solstice, anyone waiting for the sun could be disappointed. Those who witnessed the illumination marking the end of the longest night of the year must have felt truly blessed.

Newgrange is often referred to as a passage tomb, which simply means it’s a structure with a long passage leading to a chamber where the cremated remains of the dead were laid to rest. The center cavern is covered with a mound of stones weighing about 200,000 tons, yet for thousands of years, the chamber has remained water-tight without the need for repairs.

In addition to serving as a place of burial, Newgrange and similar mounds in the Boyne Valley of County Meath also provided a site for religious rituals for both the cultures who built them as well as the cultures who followed.  The Celts referred to the mound as Si An Bhru and considered it to be the home of one of their greatest gods, Dagda Mor. Although the carving on the stones is often described as Celtic in style, it is actually much older, predating the arriving of the Celts by 2500 years.

Newgrange acquired its modern name in about 1142 when monks from the Cistercian Abbey took over the nearby land and made the area the new “grange” which is a term that means outlying farm.

It is strange to think that this monument was old and mysterious when St. Patrick first set foot on the island In the 400s and even when the Celts arrived from mainland Europe a thousand years before that.

It is not so surprising to notice that it is predominantly green.

So maybe this year on St. Patrick’s Day, I will hoist a glass not only to the patron saint of Ireland, but also to the religious faithful who came before him and left us this remarkable homage to the sun.

I don’t think they would have liked the artificial tampering with time in the name of “Daylight Savings” any more than I do.

When I visited Newgrange in 1986, it was a little easier to get to than it is now. (If you tend to be claustrophobic, you might want to let others describe what it’s like on the inside.) You can learn more about this amazing site at http://www.newgrange.com.

I still have yet to write a story set in Ireland, but I do have a transplanted Irishman in my 18th Century historical novel, Restitution.