New Years in Maryland Not What it Used to Be 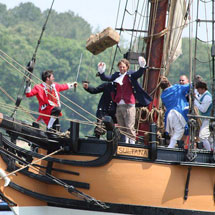 New Year’s Day is often considered a day of change, but there was one year that the change was a bit bigger than usual for Great Britain and her colonies. The change had nothing to do with New Year’s resolutions and the fact that eleven days went missing had nothing to do with excessive drinking on the part of King George or anyone else. It was a calendar correction, like shifting to daylight savings time in hyper-drive.

Most of Europe, and therefore most European colonies, had been using the Gregorian calendar since 1582. But because this new calendar was the creation of a Roman Catholic pontiff, proudly Protestant Great Britain ignored the change and continued to use the Julian calendar developed during the reign of Julius Caesar. Under the Julian calendar, each year was about eleven minutes longer than a solar year. While this doesn’t sound like much, over the course of the centuries it added up. The vernal equinox was occurring in real life about 10 days before it showed up on the calendar. Something had to be done.

In conjunction with Jesuit priest and astronomer Christopher Clavius, Pope Gregory XIII devised a new calendar that would correct the problem by means which I don’t quite understand involving leap years divisible by 100. Anyway, the calendar seemed a good enough fix and most of Europe adopted it.

Stubborn Great Britain and other protestant hold-outs waited. In 1752, Britain finally made the switch.  To realign the calendar with the solstices, 11 days had to be completely eliminated. People who went to sleep on the evening of September 2 woke up the next morning to find it was September 14.

Under the old Julian calendar, New Year’s Day was celebrated on March 25 to coincide with the Feast of Annunciation, when the Angel Gabriel announced to Mary that she would conceive and bear a child who would be the son of God. This was termed “Annunciation Style” dating. However, before Annuciation style dating became popular in the Middle Ages, western European nations used to start the New Year on January 1 in accordance with Caesar’s Julian calendar, paying homage to the God Janus.

So it is somewhat ironic that shortly before they stopped using the Julian calendar, many of these countries went back to using the Julian January 1 as the start of the year. Pope Gregory even used January 1 as the start date in his calendar, though not in honor of the Roman God. In England and her colonies, the change to the Gregorian Calendar also included a shift to start the New Year on January 1. This, believe it or not, is referred to as “Circumcision Style” dating, because the date of the New Year is timed to commemorate a special day in the life of the Holy Infant. It is perhaps not the most comfortable place to begin a year, but we still do it today.

For those living in the British colonies in the mid-18th Century, changing the start of the New Year really messed up the dating of everything. For example, George Washington was born on February 11, 1731 according to the Old Style (O.S.) Julian calendar, but under the New Style (N.S.) Gregorian calendar, his birthday was February 22, 1732. Records from this period often include two years separated by a slash (/) to indicate Old and New Style calendars (e.g., 1731/1732).

Confused Americans would later use this discrepancy as an excuse to celebrate his birthday on the most convenient shopping day in February.

Whether you’re shopping, celebrating or just hibernating, I hope your New Year gets off to a wonderful start!

Even after the New Year switched to January, it was not January 1 but Epiphany on January 6 that marked the finale of the holiday season. Twelfth NIght balls and festivities were the highlight of Christmas–and that’s where we get the 12 days of Christmas. I’ve written a few stories where the heroine’s Christmas misery culminates in a Twelfth Night ball, including Bride of Belznickel and Dinners with Mr. Danville.