King James and the Zombies

Did you know that before James I of England began work on the Bible that bears his name, he wrote a book about witchcraft? That’s not something we ever learned about in Sunday School, although interestingly enough, it was religious fervor that inspired King James to write his three volume Daemonologie.

In fact, he opens the book by explaining that it was “[t]he fearefull aboundinge at this time in this countrie, of these detestable slaves of the Devill,” that prompted him to write to demonstrate that the “assaultes of Sathan are most certainly practized.” 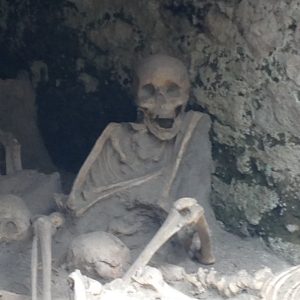 He covers different topics in each volume. The first discusses magic and “Necromancie.” Volume Two covers sorcery and witchcraft and Volume Three is devoted to ghosts and spirits. In honor of Halloween, I’ll explore each volume of Daemonologie in a different post between now and October 31.

To make his “treatise the more pleasant,” King James puts it into a dialogue form, where one character who is skeptical of the existence of witchcraft is confronted with the logic of the (in the author’s opinion, at least) wiser character who proves that witchcraft exists and its practitioners must be punished.

James begins by asserting that the existence of witchcraft is “clearelie proved” by Scripture, as well as by “dailie experience and confessions.” In a previous blog (April 14, 2011), I wrote about instances of the supernatural in the Bible, so I won’t go into that again here. Apparently the King believed the daily experience of witchcraft was so well documented there was no need to discuss it; while I hoped for some great eyewitness accounts of boys being turned into toads, I found nothing. Confessions, likewise, may be documented elsewhere, but are not to be found in this book.

He divides the practice of the “unhappie arte” into two branches, magic/Necromancie and witchcraft/sorcery. Man’s curiosity is to blame, in James’s opinion, for luring him into the practice of magic. (By contrast, revenge and greed are the prime motivators for witches, who tend to be female. I sense a certain bias here, which we’ll look into more in the next post.)

Necromancers appear to have power over the devil, but James explains that the devil has granted them some “trifles” in exchange for their body and soul. Thus it seems that those who sell their souls to the devil would fall under the category of necromancers, rather than witches.

But remember, it starts with curiosity. Man cannot seem to content himself with understanding the world around him – he also looks to the heavens to understand the skies above as well. And that’s where he gets into trouble. Studying the course of the stars (astronomy) is fine. The problem is when man tries to determine how the stars affect life on earth, particularly using the patterns in the stars to predict things such as which army will win a battle or which horse will prove faster in a race. That’s astrology. This practice, and the numerous other related practices are what James calls “the devils schole.” So the fact that modern newspapers and magazines frequently have a horoscope section must have poor James turning in his grave because clearly the devil has taken over modern journalism.

The next evil practice he discusses is conjuring spirits. For this, the conjurers form a circle (or another shape, depending on the spirit) and offer “holie water” (the Protestant James says this is the devil making fun of Catholics) and some living thing that is to be sacrificed. Then after “long praiers, and much muttring and murmuring of the conjurers” (again, James slams Catholics by comparing this to a priest saying Mass) then the spirit appears. The devil seems to do the conjurers’ bidding, raising spirits on their command, but really it is the conjurers who serve the devil in the end when he takes over their souls.

Once these conjurers strike their bargains with the devil, he often appears to them in physical form. To the “baser sorte” (the English class system continues uninterrupted in the spirit world, apparently) the devil appears as an animal such as a cat, dog or ape. To the “most curious sorte,” he will often appear in a dead body to predict the outcome of battles and settle questions of State. Who knew zombies were the aristocracy of the underworld?

James says the devil also allows himself to be conjured up with magic tablets or rings. (However, he says nothing about hobbits.)

He spends several paragraphs listing all the wonderful powers that the devil gives to his followers, and unfortunately does a pretty good job of making the “selling your soul to the devil” concept look pretty appealing, which I really don’t think was his intention.

The book ends with a brief discussion of the illegality of necromancy (it’s immoral therefore it’s illegal). When the questioner asks the wiser man what punishment the magicians and necromancers deserve, he is told it should be the same as for witches. But as to what that punishment should be, there is no explanation. We have to go to Book Two to find out.

I have not yet written any books about zombies, but for a story that involves making English kings unhappy, you might enjoy my book Restitution about the unrest leading up to the American Revolution.