Is Greyscale in Game of Thrones Just a More Dramatic Form of Leprosy?

When I first saw the grey scales the face of Stannis Baratheon’s daughter in Game of Thrones, I though it was some form of birth defect. Later, viewers learn that her face is marked from the disease “greyscale.” This malady starts on the skin, causing disfiguring dryness, and later spreads throughout the body, eventually causing insanity and death.

The contagious nature of the disease immediately made me think of leprosy, which I first learned of watching “Ben Hur” as a child. 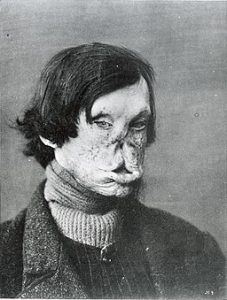 Leprosy features prominently in the Bible, and lepers were forced to live apart from others just as the “stone men” live in deserted settlements in Game of Thrones. While leprosy has some pretty unappealing physical effects, I don’t think it’s as dramatic as a disease that makes victims look like the Marvel Comic character “The Thing.” So, how much similarity is there between leprosy and greyscale?

According to the Centers for Disease Control, leprosy, also known as Hansen’s Disease, is a bacterial infection that attacks the skin, nerves, eyes, and the lining of the nose. Although the disease can have a devastating effect on the body if left untreated, it does not spread as easily as once believed and can be cured with antibiotics. Approximately 200,000 new cases of this disease are reported each year around the world, but less than 200 of those will typically be in the U.S.

Leprosy is most common in poor regions of India, Brazil, and Indonesia. Although doctors can successfully treat leprosy, many people do not have access to a doctor or delay in reporting symptoms due to fear of social stigma. Leprosy provides legal grounds for divorce in some cultures, which can leave women homeless with no source of support.

To help reduce the stigma, health organizations began referring to leprosy as Hansen’s Disease, named after the doctor who discovered the bacteria responsible for the condition. They also try to refute many of the myths that have persisted over the millennia. For instance, leprosy does not cause the victim’s fingers and toes to fall off. However, the disease causes nerve damage resulting in numbness, so that people with the disease are more likely to burn themselves since they cannot detect heat if their hands or feet get too close to fire. Burns often lead to nerve damage and infection, and the body may reabsorb injured digits, which is probably where the myth of body parts falling off comes from.

The term “leprosy” is used in the Bible to describe many different visible conditions, including mildew. So some of the bad effects associated with leprosy are wrong. Some, but not all. The ugly skin lesions are often the first sign of leprosy, but nerve damage one of the most destructive features. Even when the condition is cured with antibiotics, the nerve damage cannot be repaired. If not treated, leprosy can attack internal organs and circulation and eventually prove fatal.

Moreover, the scaly, thickened skin of leprosy victims can indeed actually look about as bad as the greyscale depicted in Game of Thrones. In addition, tissue damage to eyes and reabsorption of cartilage of the nose can give those suffering from the disease an almost monstrous appearance as in the image above taken from an 1895 medical text.

However, unlike greyscale, there is no indication that the destructive effects of leprosy cause deterioration of the mind.  The sense of isolation caused by social stigmas often has a negative effect on patients with Hansen’s Disease, but they do not become like monsters or animals, as the victims of greyscale in Game of Thrones are said to be.

So, the bottom line is, if you get leprosy, seek medical treatment quickly and you’ll be fine. If you get greyscale, you may want to contact Guinness to see if you can get in the book of World Records as the first case, because so far, there hasn’t been a disease like it.

Information about the image:

LEPROSY: Patient with tuberous leprosy. Extracted from Leprosy In Its Clinical & Pathological Aspects by G. Armauer Hansen and Carl Looft, Wright and Co, Bristol, 1895, Plate III.
This file comes from Wellcome Images, a website operated by Wellcome Trust, a global charitable foundation based in the United Kingdom. Courtesy of Wikimedia Commons.

For more information about leprosy, take a look at https://www.cdc.gov/leprosy/about/about.html and http://sciencenordic.com/leprosy-rages-still

I have not written any stories about a character with leprosy, although my character Edward Talbot in Avery’s Treasure has a scar with mysterious origins. Years ago, I started to write a fantasy about a girl with scarred face in a medieval type society who discovers an alternate universe. But I couldn’t get the universe designed (creative laziness on my part) and now if I went back to it, I’m sure people would think I was copying from Game of Thrones in some way.