If Tiki Isn’t Real, Where Did it Come From? The History of Tiki

Tiki culture—the drinks, the food, the music, and most noticeably, the décor – looks like it came from somewhere. That’s the idea. Visiting a tiki bar is supposed to give you the feeling of escaping to a tropical, exotic paradise. But that tiki paradise never actually existed anywhere beyond the station of the waiters serving drinks in coconut shells. Where did this fantasy world come from, and how did it get to be so popular? The history of tiki culture is more about American entrepreneurship than wooden tropical deities. 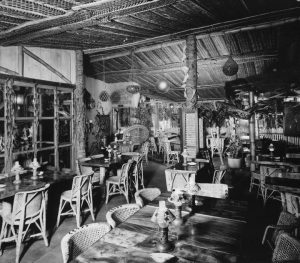 Many people believe that tiki bars sprung up after World War II, when men and women returning from service in the Pacific wanted to recapture some of the exotic atmosphere they glimpsed during time overseas. However, the history of tiki bar dates back two decades earlier, during the early 1930s. Ernest Gantt is widely credited as the founder of the first bar of this genre in Hollywood in 1933. Never heard of him? That’s because he legally changed his name to “Donn Beach” to match the name of his signature bar, Don the Beachcomber. Even the great Victor Bergeron of Trader Vic’s credited Don the Beachcomber with at least some of his inspiration.

The consummate storyteller, Beach claimed to have spent years hopping freighters in the South Pacific which gave him knowledge of the Polynesian culture. While parts of his stories have been corroborated, there are those who believe he never came close to Hawaii or the other places he claimed to have lived.

What is certain is that he opened a bar called “Don’s Beachcomber” in Hollywood, California right about the time Prohibition ended in late 1933. He began referring to himself as Don the Beachcomber, and eventually changed his name as well as slightly altering the name of the establishment. The romantic name change may have been an attempt to put some distance between his new life and past business enterprises rumored to have included bootlegging and operating a speakeasy.

In 1937, he moved the bar to a bigger space across the street and started serving food. Although he gave the dishes exotic names, most of the offerings were standard Cantonese fare common in California at the time.

Drinks at Don the Beachcomber featured even more striking names such as the Zombie, the Sumatra Kula, the Cobra’s Fang, and the Missionary’s Downfall. All this was served in tropical surroundings with lots of bamboo, glass floats, and other south seas props that may have come from Beach’s travels or his work on movie sets, depending on who you talk to. Don the Beachcomber became a popular hangout with movie stars, and some of them are said to have had sets of their own engraved sets of chopsticks kept for their visits. To complete the tropical motif, Beach even set up a primitive sprinkler system to create the continuous sound of rain on the roof. Some* say he did this to make customers think it was raining outside so they would be tempted to stay and drink more.

Beach soon had competition in the tiki business. In 1934, Victor Jules Bergeron opened a bar and restaurant initially known as Hinky Dinks. Noticing that his clientele needed as escape as much as a meal, he created an exotic atmosphere designed to evoke an Alaskan hunting lodge, complete with animal heads on the wall. A few years later, he developed a fascination with rum drinks after spending time in the Caribbean, and he started adding a variety of rum cocktails to the menu. The drinks did not really mesh with the Alaskan wilderness décor. 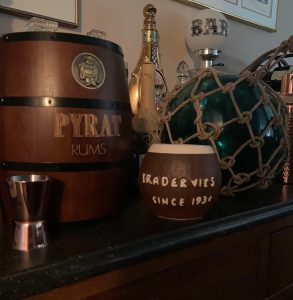 The full transformation to the South Seas motif occurred after Bergeron visited Don the Beachcomber and met with Donn Beach. Hinky Dinks turned to Trader Vic’s in 1938, and somewhat amiable rivalry ensued between the two tiki pioneers.

Where bootlegger Ernest Gantt had made himself into Donn Beach, Bergerson adopted a worldly trader persona, even though he had never traveled any further west than California. He let rumors spread that he lost his left leg in a shark attack, when, in reality, his reliance on an artificial leg was caused by a childhood bout with tuberculosis.

After World War II, both restaurants expanded into extremely successful chains. Trader Vic’s partnered with Hilton hotels, bringing tiki bars to almost every major U.S. city.  Meanwhile, Donn Beach’s ex-wife Sunny gained control of the Don the Beachcomber franchise and expanded to include 16 locations all around the country.

As part of the divorce, Beach was prohibited from opening a Don the Beachcomber in the states. He responded by moving to Hawaii, which was not yet a state, and opening a location of his signature restaurant on Waikiki Beach. In the history of the tiki bar, the golden age was just beginning.

Trader Vic’s restaurants placed more emphasis on cuisine than many other tiki bars, fusing French cooking techniques with flavors from Indonesia, Japan, Thailand, and China. Bergeron also worked with chefs from San Francisco’s Chinatown to learn how to prepare fish and meats in wood-fired ovens. The quality of the food may have been the factor that enabled the franchise to hang on a little longer than competitors. But like most tiki bars, even the great Trader Vic’s, fell victim to changing trends, and most of the locations in U.S. eventually closed.

Although tiki culture experienced a small resurgence in popularity in recent years, most modern places do not even try to recreate the intense atmosphere of Trader Vic’s, Don the Beachcomber, or other early tiki establishments. The Trader Vic’s in Atlanta is one of only two remaining U.S. locations, and the last one personally decorated by Bergeron. If you want to visit a piece of history, and then allow the bartenders to erase the experience from your memory, I highly recommend a visit.

Next up – those tiki drinks!

*Beach himself admits in an interview that he ran a hose on customers intentionally. Those interested in the history of tiki may enjoy reading his interview, which is listed with the sources below. However, many of his tales may need to be taken with a grain of salt.

To learn more about the tiki pioneers and see some pictures of the original establishments, check out some of these sources:

None of my books feature tiki bars, but some of the appeal of the rum soaked Caribbean shines through in my pirate story, Avery’s Treasure. Thanks for reading!