Summer is almost over and that means so is my series on the history of classic summer cookout foods. I’m finishing with our favorite summer dessert – the ice cream cone.

The fact that frozen desserts were invented thousands of years before the freezer means that for a long time, iced anything was a treat reserved only for the very wealthy. (See my earlier post on ice houses here) 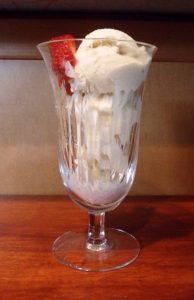 Most sources credit the ancient Persians with the first iced desserts involving fruit juice and snow with flavorings like saffron and rose water, and these are traced back before 400 BC. There’s some debate over which culture first added dairy products to the mix— the Chinese made a frozen rice and milk dish and Arabs created concoctions of milk, cream, yogurt sweetened with sugar rather than fruit juice. Like the Persian desserts, these recipes date back as much as 2000 years or more. Legend credits Marco Polo with bringing recipes for ice cream to Europe at the end of the 13th Century.

There are stories of royal chefs keeping the recipe secret, and while there is no proof these legends are true, the first recipes for iced desserts do not appear in publications for another 400 years, whet her because they were kept secret or because no one buying cookbooks could afford ice.

Or maybe ice cream just hadn’t become popular yet. By the time the American colonies were getting ready to rebel against the British, ice cream recipes were popping up everywhere, even though it wasn’t any easier to obtain the ice than it had been hundreds of years earlier. Machines were invented to make ice cream faster (using salt to drop the temperature) but the essential ice used to chill the cream still had to be cut from frozen ponds and stored in the ground until the invention of mechanical freezers in the mid-19th Century.

Of course, even after the invention of mechanical freezers, it was a long time before most people had them in their homes—at best, they had iceboxes that were able to keep groceries cold, but not frozen. However, ice cream was accessible to anyone who lived close to an ice cream shop or soda foundation (with a commercial freezer) and that’s why we have the long-standing tradition of going “out” for ice cream – the only other way to get it was to make it yourself and eat fast before it melted.

How about the cone? I grew up hearing the story about how the ice cream cone was invented by desperate vendors at the 1904 World’s Fair. One was upset because he ran out of dishes to serve his ice cream and the other was troubled because no one wanted to buy his waffles in the summer heat. So together they rolled the waffles into cones and spooned ice cream inside the cone to create a brand new taste sensation.

But a London cookbook from 1888 advises putting ice cream into an edible cone, and a picture painted in 1820 shows women eating ice cream out of glass cones, so the ice cream cone was clearly not invented in 1904. In fact, one inventor took out a U.S. patent on a multiple ice cream cone mold in 1903, so even Americans were aware of the existence of cones before the 1904 World’s Fair, though it may have been the fair that made ice cream cones fashionable.

Ice cream is a fragile treat even in this age when every home has its own freezer. In the picture above, you can see that the ice cream began to melt in the few seconds between the time I scooped it into the glass and shot the picture. Now I’m wondering how commercial photographers handles shots like this – I would think if I chilled the glass, it would cloud up.

Next summer maybe I can experiment with chilled glasses and do a series on frozen drinks— with plenty of research of course.

The information for this article came from a number of different sources including http://www.historicfood.com/Ice%20Cream%20Cone.htm.

My historical books contain plenty of discussions of desserts. Caroline Carter bakes a disastrously soggy pear pie in Langley’s Choice and Mara Weingardt steals a brandied peach half while she’s clearing the table during a dinner party in Restitution. I did once have an editor insist that I change a desert – I included a slice of marbled cake in The Appearance of Impropriety and a continuity editor insisted that marbled cake did not become popular until the 1840s. I was more than happy to remove the error, but perhaps the book would have sold better if I’d substituted ice cream.