I Shouldn’t Complain: The History of Women’s Bathing Suits 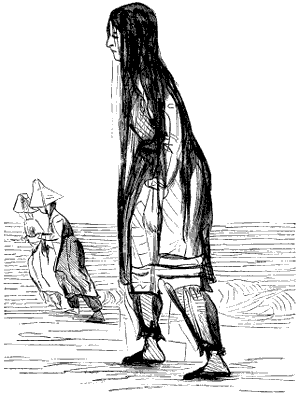 Since I live in a beach town, it should be easy to find a bathing suit that fits, right? It isn’t. I can find thousands of t-shirts that mention the word “ocean,” but nothing comfortable to wear in the actual ocean. 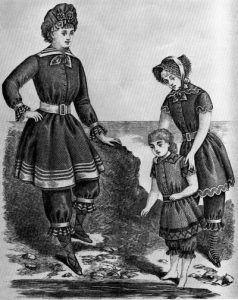 But it used to be so much worse. When tourists started flocking to the town of Carolina Beach in the 1880s, women commonly entered the water wearing long wool gowns. 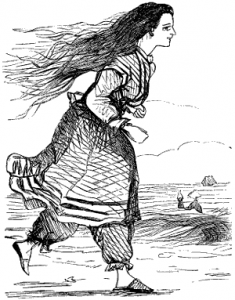 They had to be dark, heavy fabric to prevent them from becoming too revealing. Some bathing gowns had weights sewn into the hem to keep the skirt from floating up and threatening decency standards. Just to make sure no one revealed anything scandalous like an ankle, women also wore long pantaloons under their skirts.

Throughout most of the 18th and 19th Centuries, Americans and Europeans tended to view bathing in the ocean as a therapeutic treatment. Women would often be accompanied by a strong female companion referred to as a “dipper.” 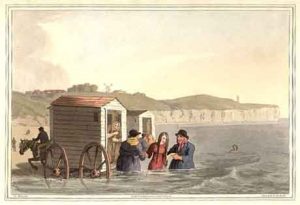 In the Regency era, women might only enter the surf in the protection of a bathing machine – a wagon drawn into the water to allow a female bather to exit the back door in privacy away from prying eyes on the shore. It didn’t seem like much fun.

But that really changed in the 1870 and 1880s. Women started to “frolic” in the ocean instead of just having someone dunk them under water a few times for medicinal reasons. Some women even learned to swim—not that it was easy to make much progress weighted down with so much wet wool. 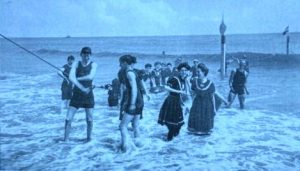 Many women would still need to cling to a “lifeline” or safety line connected to poles anchored in the sand.

In addition, going to the beach became a social outing rather than a medical procedure. All of this meant that bathing suits needed start looking and behaving a little better. The skirts and sleeves got shorter, and tights replaced pantaloons. The transition took time, however. While women like the “Australian Mermaid” Annette Kellermann started popularlizing one-piece fitted women’s suits with partially bare legs in the early decades of the 1900s, her designs were considered scandalous by most people and they violated many regulations on public beaches. Women could not compete in swimming in the Olympics of 1912 or 1916 because a wardrobe rule required them to wear long skirts during all events. 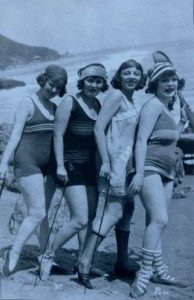 Of course, the fact that women were interested in competing in swimming events shows how drastically the attitude toward women in the water changed in just a few decades. By the 1920s, women worried more about style than modesty at the beach and regularly showed their knees in public. Of course, local officials regulating public beaches still tried to enforce modesty rules, still often insisting that bloomers could not be more than four inches above the knees. In this era, suits were more often made of knit material than heavy woolen flannel. That gave us the start of the stretchy bathing suits.

And that’s where I have my problem with bathing suits now. When they’re too tight, they’re uncomfortable and unflattering. If they’re not tight enough—like when the elastic suddenly decides to retire—then they become far too revealing.

I don’t want to go back to the idea that I need to wear a long wool dress with weights at the bottom, but I do feel like it’s time for a new trend. I don’t particularly believe I need to look or feel good in a bathing suit–I just don’t want to look and feel quite so bad…

Much of the information in this article came from “Women’s Bathing and Swimming Costume in the United States” by Claudia B. Kidwell, made available through Project Gutenberg. the two pictures came from Carolina Beach by Elaine Blackmon Henson.

The characters in my 18th Century stories like Avery’s Treasure tended to swim naked, as most people did at the time. I have yet to write a Regency story at the seaside, but if I do, I will need to include Helen because she will want to conduct bathing experiments, probably on unsuspecting other people.