How historical are hot dogs?

My series on the history of summer food favorites continues with the history of hot dogs. When I was getting ready to try our first weekend of “living history” camping at an 18th Century historical event, I tried to figure out if I could cheat a little to make things more fun for my kids, who were pretty young at the time. Camping involves roasting hot dogs and making s’mores, right? I didn’t figure Hershey had packaged his chocolate bars before the Revolutionary War, but I did wonder if I could get away with hot dogs. They were Frankfurters. Surely the Germans had been making sausages in Frankfurt for a long time and I hoped maybe they resembled modern hot dogs enough that I could cook them for my family at an 18th Century encampment without looking too ridiculous. 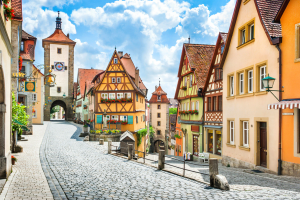 As it turns out, ridiculous doesn’t always matter at these events,* but for the record, no, I could not get away with roasting a package of Ballpark Franks and calling them 18th Century German sausages. Not by a long shot.

The texture of a modern hot dog, or even a 100-year- old hot dog, is far different than an 18th Century German sausage. That’s because the equipment used to grind meat to a fine texture was not invented until the mid 1800s. Before that, sausages were stuffed with meat minced by hand, which had a very different, irregular texture.

Germans may not have invented sausage (there are references to sausage in ancient Greek and Roman texts) but the minced meat and spice mixture forced into a casing certainly became quite popular in Germany, developed many different varieties in the country, and became closely identified with the European nation. The “Frankfurter Würstchen” or “little Frankfurter sausage” is a type of sausage said to date back to the 13th Century, although it’s name did not become officially associated with the geography until the 1860s, which leads me to believe this sausage was popular in more places than Frankfurt. In any case, this type of sausage was made of smoked pork stuffed into sheep intestines. They were often packed in boxes between sheets of parchment paper, and thus had a square, rather than round shape. Because the filling is smoked, these sausages would not be cooked, but only heated in water before serving. Not on a stick over an open fire. And I couldn’t imagine my kids enjoying the sheep intestine concept too much.

Incidentally, while I might have been able to serve these child-unfriendly sausages at a Civil War reenactment, if not a Rev War era one, we still couldn’t call them “hot dogs.” That name did not become popular until the 1890s, when the sausages were served at baseball games and beach amusement parks like Coney Island. The name may have evolved from a combination of the term “red hots” and “dachshund sausages,” which was a German term for the long, thin Frankfurters. There are many stories about how hot dogs got their name, and, as with the hamburger, there are just as many stories about how they came to be serve on a bun. I think the best of these is a vendor who supposedly lent his customers white gloves to wear while they consumed their hot sausages so they would not burn their fingers. Since the customers frequently did not return the gloves, profits went out the door, literally, and he came up with the long bun as a substitute.

And now back to my concerns about cooking authentic food at a reenactment. While some living history interpreters go to great lengths to prepare only food that would have been available locally at the time in a manner in which it typically would have been prepared, others fix whatever they feel like eating (although they usually will heat it over an open fire in an iron pan). One morning last year I woke to see a gentleman at a camp nearby– a camp I had greatly admired all weekend for its authentic attention to detail– roasting bright yellow marshmallow peeps in his cast iron skillet. If only I had brought my Hershey bars, we could have had s’mores after all.

If you enjoy reading about historical cooking techniques, you might be interested in my book Langley’s Choice which tells the story of a family in colonial Maryland that loses their servants and suddenly realizes they have no idea how to cook or do anything else to survive.

The image of Frankfurt above looks like an artist’s rendering of a theme park, but it actually comes from the U.S. State Department website.