The Surprising History of Irish Whiskey

For some reason, the other day I had to look up Irish whiskey to see whether it was spelled with an “e,” and while I was checking the spelling, I learned about the history of Irish whiskey, too. It was interesting enough to inspire me to share (the knowledge, not my stash of liquor. I’m not that generous.) 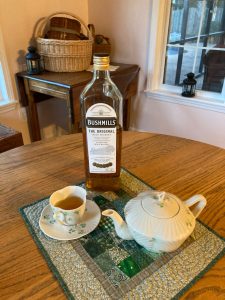 Irish whiskey is one of the very oldest European distilled spirits. Legend has it that monks took the knowledge of distilling perfume from Mediterranean culture and altered the technology to create ardent spirits sometime around A.D. 1200. The name “whisky” even comes from the Irish branch of the Gaelic language –  uisce beatha, which roughly translates as “water of life.” Those monks knew they were onto something.

Early records of whiskey distilling in Ireland are scarce, but there was enough of it going on that the English Parliament felt a need to pass a law in 1556 restricting distillation to “gentleman” unless the distiller had a license. This law was promptly ignored. In 1661, Great Britain instituted a tax on whiskey distillers, but registering to pay the tax was voluntary, and not surprisingly, few volunteered. Finally, in 1761 the government started to get serious about collecting taxes from producers, and whiskey was then divided into two types – “parliamentary whiskey” and poitín (often spelled “poteen,”) small pot-stilled liquor produced and sold illegally.

The popularity of the drink grew phenomenally fast and by the the end of the 1700s, the whiskey sold better in Ireland than rum, brandy and gin combined. By the 1820s, the distilleries in Dublin were among the biggest in the world and for a time Irish whiskey became the most popular spirit worldwide, far surpassing Scotch whisky.  Irish distillers even added an “e” to the word to differentiate their product from the inferior version produced in Scotland.

But this popularity didn’t last. Changes in distillation processes and aggressive moves by Scotch distillers cut into the market. Then the market virtually disappeared as Ireland engaged in a series of conflicts with it’s biggest market, the U.K., then engaged in civil war with itself, and then saw its American market snowed under the blanket of a ten year prohibition. By the 1930s, there was virtually nothing left of the booming industry and the decline continued until there were only five distillers remaining by the 1950s. When those consolidated in the 1970s, there were only two left–and they were both owned by the same company.

Frankly, I think if it hadn’t been for Irish coffee, the world would have forgotten about Irish whiskey.

Fortunately in the late 1980s, the trend slowly started to reverse. A new distillery opened for the first time in 100 years. Others followed and the market share has been steadily growing. However, it’s hard to imagine it will ever catch up to Scotch whisky, which today sells 15-16 times better.

But who knows? America is a big market, and we don’t hold huge drinking festivals to celebrate any Scottish saints. So maybe it’s just a matter of time until Irish whiskey regains its title.

I know I’m doing my part to make that goal a reality.

Much of the information about the history of Irish whiskey came from Masters of Malt (https://www.masterofmalt.com/blog/post/irish-whiskey-everything-you-need-to-know-part-1.aspx)

If you enjoy reading about fictional characters who drink a lot of Irish whiskey or whatever else they can get their hands on, you might like my 18th Century historical stories Restitution, Langley’s Choice and Avery’s Treasure (although the pirates in that book drank far more brandy than whiskey.) And the characters Jack McCready (Restitution) and Edward Talbot (Langley’s Choice and Avery’s Treasure) both happen to be from Ireland as well.