Why Do Beaches Have Boardwalks?

Shortly after we arrived at the beach, my daughter and I headed straight for the boardwalk. And I started to wonder why our society puts collections of shops, restaurants and amusements on a length of boards where the ocean meets the sand. We don’t put boardwalks around resort lakes. You won’t find a boardwalk at the Grand Canyon. But they seem to be a requirement in beach towns. Why? 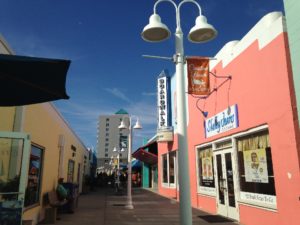 To find out, I did some research on the history of boardwalks. The concept of a beach boardwalk was introduced in Atlantic City, New Jersey in 1870. It was not designed as a place to concentrate tourist activity. In fact, commerce was not permitted within 30 feet of the original boardwalk. The walkway of wooden planks was created so that visitors could walk along the beach without getting sand on their feet.

And the boardwalk supposedly took its name not from the wooden boards but from the structure’s designer, Alex Boardman.* A conductor on the Atlantic City-Camden railroad, Boardman was trying to address the problems caused by all the sand visitors tracked into hotels, trains and other public spaces.

Little did he know that the planks named in his honor would soon host everything from freak shows to concessions selling freaky fried fair foods. By the early 1900s, amusements were popping up along the Atlantic City Boardwalk and other beach towns were creating their own boardwalks. Coney Island, supposedly referred to as “Sodom by the Sea” in the 1800s because of the gambling, drinking and general corruption centered around the beach attractions, started drawing large numbers of beach visitors in the 1830s and 40s, but did not actually have a boarded boardwalk until 1922.

Boardwalks were primarily concentrated on the east coast of the U.S., but Santa Cruz, California opened a boardwalk amusement park in 1907 which still operates. Although many boardwalk areas fell on hard times in the decades after WWII, they are being revitalized today. The movement is so popular, in fact, that Myrtle Beach, South Carolina spent well over $12 million to build a boardwalk in 2010 because visitors expected a beach resort to have one. 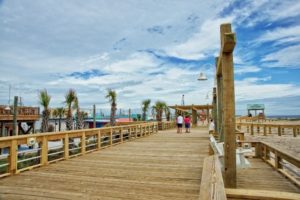 The boardwalks I am most familiar with are in Ocean City, Maryland, Rehoboth Beach, Delaware and Carolina Beach, North Carolina. The Ocean City boardwalk was first built in 1902, but it was a temporary walkway that was rolled up and stored at high tide. The permanent boardwalk was constructed in 1910, expanded in the 1920s, destroyed by a hurricane in 1962, and promptly rebuilt to its current length of 2 1/2 miles.

In Rehoboth Beach, the first boardwalk was built in 1873. Destroyed and rebuilt many times, the one mile boardwalk is now considered by some travel experts as the best in the country. (Personally, I find it remarkably similar to Ocean City’s boardwalk)

Like many other beach boardwalks, the one in Carolina Beach suffered cycles of destruction and rebuilding. The popular beach attractions were wiped out by a massive fire in 1941 and immediately rebuilt of cinder block. Though referred to as the boardwalk, the restaurants and attracts are located on concrete set back from the beach. The town built a wooden boardwalk along the dunes about 20 years ago and this area is separated from the arcades, ice cream shops, t shirt stores and other commercial boardwalk activities, much like the original boardwalk in Atlantic City all those years ago. 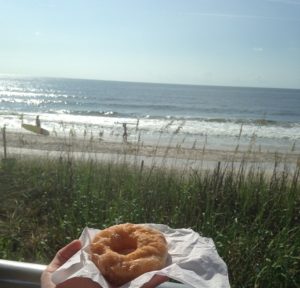 Many cities have piers that offer attractions similar to those on classic boardwalks, but they jut out into the water rather than running along the sand. And they do not pay homage to Mr. Boardman by incorporating his name into their titles. In my opinion, any beach town worth its salt will have both a a pier for fishing (or drinking coffee at sunrise) and boardwalk featuring semi-dangerous amusement rides and dangerously unhealthy snack foods. My favorite is a fried doughnut from Britt’s Donuts, a popular choice on the (non-wooden) Carolina Beach boardwalk since 1939. (I wrote that in singular but usually eat at least two of them before I stop for breath.) 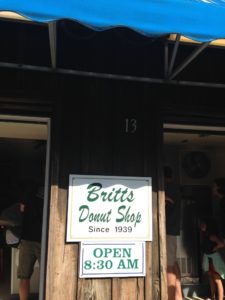 So after my research, I now understand the beach boardwalk phenomenon a little better. It all started with housekeeping—keeping sand off the train and out of the hotel lobby. It continued with ferris wheels and fried doughnuts. And now, well, it’s just what people expect when they go to the beach.
Here’s hoping your summer includes great trips to places that make you smile!

* Atlantic City boardwalk’s co-designer Jacob Keim might have gotten more credit if his name evoked images of timber, sand or seagulls. The picture of the non-commercial Carolina Beach boardwalk (without the doughnut) was provided by the Federal Point Historical Preservation Society (http://federal-point-history.org)