Have yourself a scary little Christmas

It took me by surprise. I was viewing a gingerbread town Christmas display at the Broadmoor in Colorado Springs and there, right next to the chocolate bison, was a gingerbread graveyard. The sweet, innocent, childlike associations of frosted gingerbread fit our image of Christmas, but seem really out of place with the concept of death, decay and the macabre. Did that graveyard belong in a Christmas display? And how about the zombie Christmas tree (“Dear Santa, pleaz bring me some brains”) I saw at the Festival of Trees? What has happened to our wholesome holiday? Is it being corrupted? 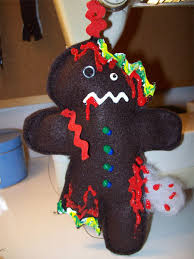 Nope. It’s just recapturing some of its former gory glory.

Long winter nights have provided the perfect backdrop for storytelling since humans were first able to build a fire and stay awake after sundown. And at the time of year when the sun seems to be in danger of disappearing entirely, it is natural that the darkness would inspire tales of death and evil spirits from beyond.

I wrote about one of those evil spirits, the Belznickel, in “Here Comes Anti-Claus” on the Risky Regencies site on December 6 (as well as in my story, “Bride of Belznickel”) and I’ll be discussing Christmas ghost stories in more detail on the History Undressed site on December 20.

But here are some more characters from the scary side of Christmas:

Krampas – This Austrian character shares a lot of characteristics with Belznickel (as does the Scandanavian “Black Peter”), but whereas sometimes Belznickel is neutral or even mildly benevolent, Krampas is a true demon. He has cloven hooves and horns like a goat—or the devil. He carries whips and chains (like Belznickel) but also often a sack or washtub to carry off bad children to be drowned, eaten or dragged into Hell. Whew! Compared to that, some coal in the stocking sounds pretty good, doesn’t it? Despite his gruesome reputation, Krampas was so popular that in the 1930s the Austrian government felt it necessary to outlaw Krampas celebrations. They still continue to this day, however, without the government’s blessing.

Yuletide Cat – Kids in Iceland welcome visits from the Jolasveinar or “Yule Lads” who are sort of like the Seven Dwarves but come bearing gifts. However, they also bring with them a rather nasty feline who is said to eat children who don’t have new clothes for Christmas. So guess what’s at the top of your wish list each year?

Yule Goat – Similar tradition from Finland brings visits from Jouluppukki or the “Yule Goat.” He was said to ride down from the north on the back of a horrible beast. Unlike Santa bringing gifts, this guy demanded that people give gifts to him, and if you failed to comply, all Hell would break lose quite literally.

Well, on that note, I’ll sign off and let everyone get busy buying new clothes and gifts for the Yule Goat in your life.