Gourd ‘n Plenty: Why Our Images of the First Thanksgiving are Dead Wrong

I don’t really like most Thanksgiving decorations, but after all the Halloween decorations come down, something needs to fill the void until I’m ready to look at reindeer and shepherds. What to use? I’ve never been terribly enamored of the turkey image as a decoration, in part because I was a vegetarian for many years and could see nothing thanks-worthy from either the turkey’s perspective or mine. So I settled on the image of the cornucopia, the horn of plenty, overflowing with vegan alternatives to the traditional poultry-centric feast. 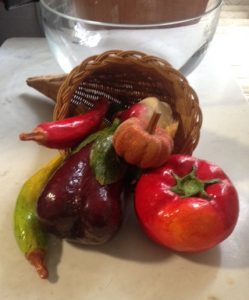 I don’t actually like to eat the squashes any more than the turkey, but the colorful gourds looked better to me than a corpulent condemned bird. Anyway, we all know the association of the turkey with Thanksgiving comes from the pilgrims who landed at Plimoth in 1620.  But where does the cornucopia image come from?

The horn of plenty originates with the Greek God Zeus and the horn of the goat Amalthea.  Legends differ as to whether Zeus broke the horn by accident or the devout quadruped broke off her own horn as an offering.  Either way, out of remorse or gratitude, Zeus promised the goat her horn would be forever filled with whatever fruits she desired.  Under the Romans, the story evolved into the symbol of the goddess Copia.  She held the cornucopia to symbolize endless bounty.

And now it is associated with the pilgrims from England who would be turning in their graves at the thought of paying homage to either Zeus or Copia.

The cornucopia probably became associated with the American Thanksgiving holiday because it is also a symbol of harvest festivals celebrated by numerous cultures.

The “first Thanksgiving” with black-hatted pilgrims and American Indians feasting on turkey and pumpkin was actually more of an English Harvest Home celebration.  While the colonists did celebrate official days of prayer and thanksgiving soon after — and before — the 1621 date we commemorate each year, those holidays are not quite what most people imagine.  One Thanksgiving Proclamation from 1676 admonishes the people to give thanks “when our Enemies are in any measure disappointed or destroyed.” Those enemies would be the “Heathen Natives of this land.”  This really plays havoc with the Norman Rockwell image of Indians and pilgrims sitting around the table together.

But regardless of the later hostilities, there would have been no “First” Thanksgiving without the native Americans because they brought or showed the settlers how to find most of the food.   Pumpkin pie was not on the menu, as the pilgrims had long since run out of flour and sugar, but they probably did eat stewed or boiled pumpkin.   Mashed potatoes were also absent from the table — if there was a table — because the settlers had no dairy cows to produce milk and butter and many of them feared that potatoes were poisonous.

Sweet potatoes were a common food for natives further south, but not in New England.  Although cranberries were plentiful in New England, without sugar, they would have tasted a little different than what we’re used to.  The feast may have included turkey, but some historians believe the settlers used the word “turkey” to describe a variety of different wild birds, so the fowlers could have brought in ducks or geese instead.   Documentation indicates that the feast definitely included venison and fish.

So why don’t we see a picture of Bambi® on our Thanksgiving decorations?  The mystery remains unsolved.

Whether you will celebrate with pumpkin, poultry or Chinese carryout, I hope you have the chance to enjoy some time with family and friends over the holiday weekend. Happy Thanksgiving!

If you enjoy reading about food during the colonial period, you might be interested in my story Langley’s Choice, in which a family of young ladies in Maryland suddenly lose most of their servants and are forced to learn cook for themselves, with rather mixed results.