The Eighteenth Amendment to the Constitution was ratified on this day in 1919, marking the end of one era and the beginning of another. Outlawing the “manufacture, sale and transportation of intoxicating liquors,” the amendment represented a victory for those in the temperance movement who believed many of society’s evils could be traced to the prevalence of alcoholic beverages. 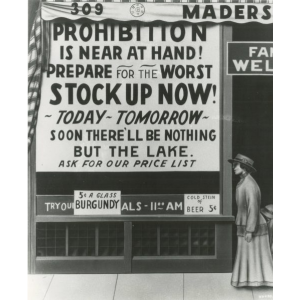 There were more saloons than schools, hospitals, libraries parks or churches. Beer drinking was so popular that by 1910, the annual per capita consumption had risen to 21 gallons, with those prone to violence tending to drink more than their fair share of that average. So how was the ban on intoxicating beverages passed by Congress and ratified by the states so rapidly? World War I played a large role. The majority of brewers and a great percentage of beer drinkers were of German descent, and even though the companies might now be run by second and third generation Americans, prohibition supporters gained a lot of ground by arguing that it was unpatriotic to support the beer industry.

But while the old saloons closed and the word virtually disappeared from our language, inebriation did not. It just became more dangerous.

The saloons didn’t close right away, of course. The Amendment set a one year deadline before the ban would take effect, and those with stores of wine and spirits began hiding, hoarding and acquiring more. Supporters of the ban, which had temporarily been in effect during World War I, believed Americans would see the benefits of an alcohol-free society and soon there would be little need to enforce the law. They estimated enforcement costs at five million dollars a year.

They were wrong.  By 1923, Congress was being asked for over $28 million for enforcement, and estimates ran as high as $300 million a few years later.

Americans did not willingly give up their intoxicating beverages. They hid them. And they changed them.

Alcohol had to be smuggled in or made in secret.  Those who risked breaking the law to import the contraband wanted to maximize their profits. So they concentrated on distilled spirits, with a much greater percentage of alcohol. Profits were further extended by cutting the booze with other substances to make it go farther. Water would be obvious and noticed by patrons, so they often used something to give the drink a little kick, like industrial methanol or even embalming fluid.

Creative bartenders mixed the bad booze with fruit juice and sugary syrups to mask the taste.

But the poisonous affects were not as easy to hide. By 1926, 750 people in New York alone had been killed by toxic cocktails, and thousands more paralyzed or made blind from the concoctions downed in speakeasies and other underground drinking establishments.

And then there was the problem of the mobs controlling the supply. Instead of reducing crime, the ban on alcohol created an ideal incubator for the birth of organized crime. The ban was repealed by the 21st Amendment in 1933. It was called “the failed experiment.”

Many people draw parallels between the 1920s prohibition on alcohol and today’s current ban on illegal drugs such as marajuana. There is no doubt that today’s illegal drug industry supports organized crime now just as the illegal bootlegging operations supported crime bosses in the 1920s. Would repealing the ban reduce the strength of the drug lords enough to outweigh the harm that might be done from easier access to such drugs? Hard to say without a crystal ball.

I for one am glad I was born after 1933. I’d hate to live in a world without champagne and margaritas.

If you like reading about speakeasies, you might enjoy “Cornfed Blues,” the decopunk story I co-wrote with science fiction and fantasy author Catherine Asaro.