Glamping May Have Saved the Republic: George Washington’s Attempt to Win French Support with a Fancy Campsite

We may owe our independence as a nation to a fancy tent and some pilfered uniforms. As autumn began in 1782, George Washington set up camp outside New York City. A year after the decisive victory at Yorktown, the situation was by no means as jubilant as most Americans today would assume. We know that the British signed a peace treaty in 1783 and that we essentially won the war after the surrender at Yorktown. 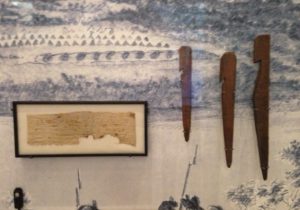 In 1782, however, this was by no means certain. The British still occupied New York City. Washington had no funds to pay his troops, and they could turn against him at any moment because of their outrage at the lack of money. He knew that peace negotiations were under way in Europe, but what if the English backed out? He had virtually no forces left to contend with the might of the British empire. While fIghting had temporarily ceased along the eastern seaboard, all along the western frontier, militia forces clashed regularly with loyalist holdouts and native American allies of the British.

Washington looked to the French for assistance, and he hoped to gain it by making an impressive show with his camp at Verplanck’s Point outside New York City. The French had silver that could be borrowed to pay the beleaguered soldiers and provide the pensions promised to officers. The French also had a navy that could drive out British forces should they attempt to stay. If the French viewed the Americans as strong allies, they might be persuaded to continue providing assistance. 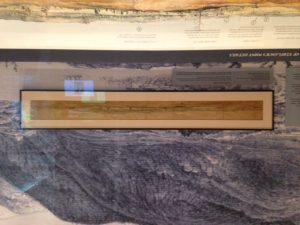 To make his motley collection of unpaid soldiers look more like the professional troops employed by European nations, Washington had a bunch of red British uniforms dyed brown to outfit the New Jersey brigade. He erected a marquee tent similar to those used by leaders on the battlefields of Europe, with elegant dining facilities. Soldiers erected picturesque porticos outside the tents to lend a decorative touch. When the commander of the French forces, the Count de Rochambeau, approached, Washington ordered his troops to “pay him the honors due the commander in chief.”

He also demanded that the tallest solders be stationed in the front rank.

Washington eschewed many of the fancy trappings of 18th Century aristocracy, such as wigs and ornamentation. However, he was always very aware of appearance and how get the most mileage from a good impression. French military engineer Pierre L’Enfant painted a panoramic watercolor scene showing Washington’s encampment at Verplanck’s Point, and this painting has been on temporary display at the New York Historical Society. The display also included original tent pegs, part of a tent pole from the dining tent, and a scrap of fabric said to be from an interior panel of Washington’s tent. The exhibit also featured an order book open to the page from September 12, 1782 where Washington specifies that the his most impressive men should be placed in front to make a good show before the French aristocracy. 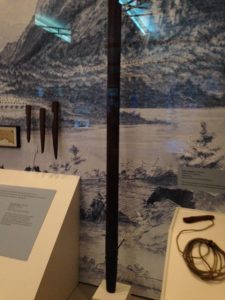 The painting and display provided a great reminder that wars are not won by battles alone, and the smallest details can add up to a big dividend. We know now that British decided continuing the war was not in their best interests. But if they had not had to worry about an American alliance with France, the Brits might have changed their minds.

These glimpses of history help us see the uncertainties that every leader must confront on a daily basis unless they are fools or megalomaniacs. Sometimes it is hard to tell whether they are hiding their fears or are not astute enough to know when it’s time to worry.

This information came from the exhibit “Revolutionary Summer” at the New York Historical Society (https://www.nyhistory.org/exhibitions/revolutionary-summer). And yes, the man who painted the panorama (which is several paintings attached together) is the same Pierre L’Enfant who designed Washington DC. According to legend, our local  historical celebrity Benjamin Banneker saved the city after L’Enfant was fired and left in a huff, taking his plans with him. Banneker is said to have reproduced the plans from memory, recreating all the streets, parks, and buildings laid out by L’Enfant. However, while Banneker played key roles in the surveying of Washington and he did have an amazing memory, he left the project before L’Enfant did, so it is unlikely that he recreated the plans.

If you like to read about American attitudes around the time of the War of American Independence, you might enjoy my book Restitution.