In honor of Halloween, I decided to check out the book Weird Maryland to see if I could find some good creepy stories about places I know. 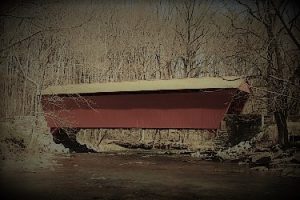 The first one to really catch my eye was a haunted bridge story. It was about a bridge I’d walked across several times. I had heard it was haunted and I even had my own story of a scary encounter at night. So I was eager to read about where the ghost legends came from.

The bridge is the Jericho covered bridge in Jerusalem Mill Village northeast of Baltimore. The original bridge dates to about 1865, but it was refurbished in the 20th Century.

One story about bridge haunting concerns a girl riding on the back of an old farm truck. Since she was afraid of the dark, her father gave her a lantern for light. But she fell asleep and the lantern tipped over when he took a sharp turn, so the hay in the back of the truck caught fire. It spread so fast that by the time the farmer stopped the truck, it was too late to save the little girl. Her ghost is supposed to haunt the bridge, commenting on the lights from cars.

There are a number of “hanging” stories, too. Supposedly three young men hung themselves from the rafters. Some legends say that runaway slaves were hung from the bridge after they’d been caught. So ghost hunters say that if you stop your car on the bridge late at night, you can see a body dangling from the rafters. Others say you can hear screams.  While it’s certainly plausible to believe someone was hung from the rafters, I haven’t ever heard any specifics of who and when (or how they were able to scream with a rope knotted around their necks) and the contributors to Weird Maryland didn’t provide any. There’s also a story of a ghostly old woman in white carrying a basket of flowers. No clue about who this is, either.

So I was disappointed that the stories about the haunted bridge seem to be little more than runaway imagination. (In fact, it is more like imagination moving at a slow crawl.) The bridge cover is low and noises echo like crazy inside. The sound of just the rushing water from the river would be enough to spark a few stories.

But I do know of one scary encounter at the bridge that is true because it happened to me. A few years ago, my family camped with some friends on the grounds of Jerusalem Mill as part of a living history demonstration. Late Saturday night, my friend Angie and I decided to walk over and visit the “haunted bridge” which was about a ten minute stroll away. There was a bright moon overhead, so it was easy to see where we were going. But as we drew close to the dark covered void that stretched across the river ahead of us, we were suddenly blinded by a bright light. We scrambled out of the way and my friend vanished. She completely disappeared from view.

Okay, so the bright light was car headlights and Angie disappeared because she stepped into a trench next to the road. She twisted her ankle very badly, so it was scary and dangerous, but not terribly ghostly. However, maybe her injury was the revenge of the ghosts who didn’t want us to visit the bridge.

Was it the truck girl? A hanged man? Or the basket lady? Or one of our husbands trying to get us to stop goofing around and get back to camp? To this day, it remains a mystery…