Fat Knights and Mummy Peepholes: Why You Should See The Cool Stuff at The Met Even if You Don’t Like Art

I’d been avoiding it for years. Every time I visited New York someone was bound to suggest that I should see The Metropolitan Museum of Art, known to most people simply as “The Met.” I’ve enjoyed visiting art galleries in DC where they are free. So why should I pay to see art that wouldn’t look any different to me than the art I’d been seeing for years?

But on my recent trip I finally gave in to the weight of public opinion. 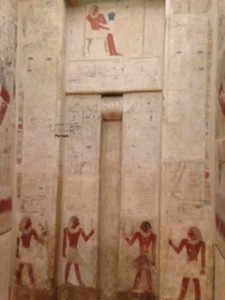 And now I’m a believer.

I first started with the section of the museum labeled “Egyptian Art.” I had no interest in artistic merit—I just wanted to see a mummy or sarcophagus. And right away I ran into (almost literally) an entire tomb that was transported into a gallery. Very cool. I took pictures pretending I was at the Luxor in Vegas. 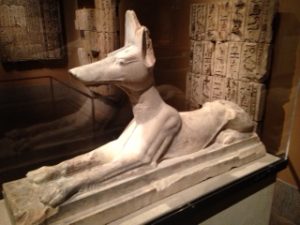 Then I moved on in search of mummies. I found a lot of luggage belonging to a particular mummy. 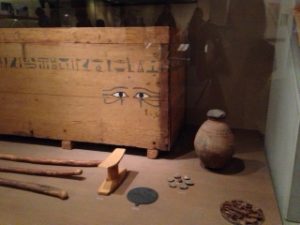 His baggage for the journey to the afterlife included piles of jewelry, a plate of severely dehydrated food and a mammoth jar of beer. Apparently the beer continued to ferment after his entombment and the pressure blew out the cork and knocked the jar on its side, so his afterlife encounter would have been even dryer than anticipated. (I had a similar experience once when I attempted to pack beer in a checked suitcase on an airplane. Beer does not travel well in this life or the next.)

The sarcophagus had eyes painted on one end so that the mummy could see out the holes. So I’d found a mummy peephole. But still no mummy. Then I saw a sign explaining that the mummy had been sent to the Museum of Natural History. When he comes seeking revenge for the mishandling of his baggage, I don’t want to be around.

After that I thought I was done with the Egyptian stuff, but while looking for a bathroom, I instead found an entire Egyptian temple that had been transported piece by piece. 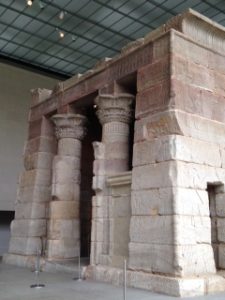 (Fortunately, treasure hunters did not steal the Temple of Dendur –it was given to the U.S. in appreciation for help moving artifacts that would have been submerged by waters from the Aswan Dam in the 1960s.)

This is definitely not something you find in your average museum. The Met was scoring high on the cool chart even without the mummy.

Next I started toward the collection of knights in armor (well, I didn’t expect to find the actual knights because they were 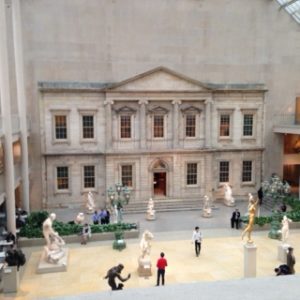 probably at the Natural History museum too). In any case, I got sidetracked by the Period Rooms which were rooms that people literally sold out of their houses, paneling and all. It was apparently quite a common practice a hundred years ago for those with more history than cash in the family to sell off the most ornamented rooms to museums collecting decorative arts. The entrance to the period rooms is the entire two-story stone façade transported from another old building.

After the Period Rooms I was off to the armor. While looking around to find the oldest pieces in the collection, I noticed that one of the knights had a much more rotund figure than I was accustomed to think of as knightly. Turns out that the armor I was looking at was used by Henry VIII in battle late in his reign. I thought that by this point in the mid 1500s, most armor was ceremonial or used only in tournaments, so seeing field armor was a surprise. 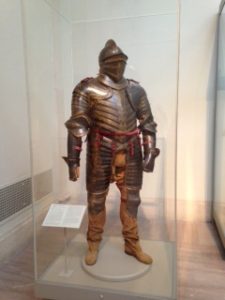 It was also surprising to learn that Henry VIII actually made it on to the field of battle, especially in his latter days when the weight and gout would have made leading by example pretty difficult.

Obviously there is much more to cool stuff at The Met than fat knights and mummy peepholes, but to my uncultured eye, those were definite highlights. I did see some amazing paintings, like the historically inaccurate “Washington Crossing the Delaware,” which is the size of a gymnasium wall. And despite my ignorance about art, I was impressed.

So on my next visit I might just have to go to the art museum to actually look at the art. I’ll have to check in with the mummy first, though, to see if he’s come back to wreak revenge for messing up his afterlife luggage.

If you like to read about the trouble people can get into when their curiosity gets the better of them, you might enjoy my not-so-traditional Regency  romance “Love & Lunacy” stories featuring Helen Wright, who would rather study mold growth than shop for bonnets. She was so much fun and added so many unique observations to the stories that I ended up featuring her in every one and even gave her a “love” story of her own at the end of the series. She makes her fictional debut in A Certain Want of Reason.