Exploding bottles: the history of Champagne

Champagne, I had always heard, was invented by monks who made a mistake and “ruined” a batch of wine. But this year as I prepared to drink my way into the New Year, I decided to find out if that was actually how my favorite drink came into being.

It turns out the monks didn’t really invent it – it sort of invented itself and they, in fact, were trying to prevent it from doing so.

But let’s take a few steps back to get the full story. 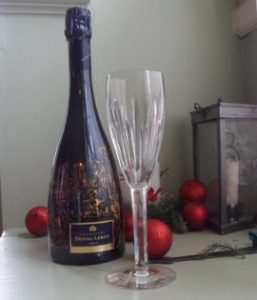 Most of the fizzy wine referred to as “champagne” is not actually Champagne because to be official, it has to be made from grapes grown in the Champagne region of France. Wine grapes were cultivated in the area at least by A.D. 72, but twenty years later, the Romans outlawed wine making in the region in order to reduce competition for the wines they produced closer to the capital. The French love wine as much as they hate being told what to do, so they continued to produce wine in secret until the ban was lifted. For hundreds of years, the traditional Champagne wine was amber or pink, and it was not fizzy, at least not intentionally.

As the climate cooled during the Middle Ages, challenges mounted for the wine makers in the Champagne region. The growing season became too short for the grapes to fully ripen and develop the rich flavor of grapes produced in neighboring Burgundy. To make matters worse, the onset of winter often stopped the fermentation process too early. When the weather warmed in the spring, the yeast would awaken and begin to ferment again, producing carbon dioxide that put enormous pressure on the bottles, often making them explode. The bottles that didn’t explode were frequently found to be full of bubbles, which was considered a tremendous fault.

In the 17th Century, the Benedictine monk Dom Pierre Pérignon and others worked to develop ways to stop the bubbles from forming. Described by colleagues as a perfectionist, Pérignon established strict procedures to ensure that the wines his abbey produced were of the highest quality. Although he insisted on using only red Pinot noir grapes because he believed they were less likely to produce gas, he limited the contact between the pressed wine and dark wine skins to create a white wine from flavorful red grapes.

But is he remembered for this? No. His name is forever associated with the bubbles he tried so hard to prevent.

While the French saw the bubbles as a fault, many English patrons who ordered wine from Champagne enjoyed the effervescence. In fact, they liked it so much that scientists learned how to deliberately create sparkling wine by adding sugar before bottling. English entrepreneurs were likely creating their own sparkling Champagne well before the vintners of Champagne decided to capture the bubbles on purpose. So technically, maybe sparkling wine should be required to come from England before it is deemed worthy of a special name.

When Phillippe II became Regent of France in 1715, he made the fizzy drink popular among French nobility, and the modern Champagne industry was born. However in the early years, it was a risky business with houses losing a substantial percentage of their inventory due to exploding bottles. A more precise measurement of sugar added to the wine, stronger bottles, and the development of corking machines all helped improve stability of final product.

While most of us who buy a bottle of bubbly today don’t expect it to explode in the refrigerator, many of us hold our breath as we loosen the cage and ease the cork out of the bottle. Will the cork shoot out like a rocket and spew foaming wine all over the room? Or worse yet, will it exit the bottle with timidity, exposing flat, dull wine underneath? The mystery and drama that comes with every bottle adds to fun. But whereas the original Champagne makers hoped for a quiet opening, we now demand the “pop.”

Excuse me, I think it’s time to open the bottle in the picture and see what happens…

Have a Happy New Year!

None of the characters in my books have been allowed to enjoy Champagne as much as I have. However, in my colonial story Restitution, several characters serving at a dinner take the opportunity to drink up the leftover wine from guests’ glasses.