On this day in 1775, Abigail Adams wrote to her husband John, who was in Philadelphia with the Continental Congress. Of course this was long before she knew she would be some day be the First Lady, that the rebellious colonists would succeed in their fight against the British Empire, or even that the 13 colonies would band together to declare their independence. She did know that her own colony of Massachusetts had rebelled and was being punished for it. And she knew that her husband was enmeshed in that rebellion. 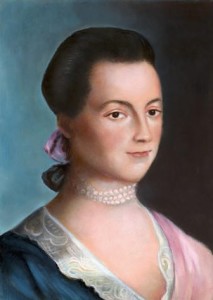 In an offhand way, she mentions that while she might normally feel pity for a woman with no children, perhaps instead she might consider the childless woman in a happier condition since she would be spared the “anxiety every parent must feel for their rising offspring” in such “perilous times.”

Many people today worry that they live in perilous times, but I think truly perilous times have been rare for most residents of the United States, at least within the last 100 years. Today we do not fear that a hostile occupying army could march through at any moment and destroy our livelihood and maybe even our families. We don’t need to worry that an outbreak of smallpox could wipe out our town. Those worries were quite real in Abigail’s time, but she chooses not to dwell on them. Instead, her worries are practical concerns about daily living. Of course she asks her husband to send her a few goods from the big city. But she spends the majority of her letter urging her husband to persuade Congress to tackle some trade issues, taking a wide world view of a narrow problem. She advocates for keeping hard currency—gold and silver—in the colonies rather than allowing so much of it to be spent in the West Indies for molasses, coffee and sugar. She notes that silver currency is becoming rare and worth far more than paper money. “If any trade is allowed to the West Indies,” she suggests, “would it not be better to carry some commodity of our produce in exchange?”

I find this remarkable thinking on the part of a woman concerned with her own family’s shortage of affordable cotton-wool and flax. Personally, I would be inclined to simply complain about inflation and perhaps lament the causes. For me to go so far as to envision a solution and propose it to lawmakers would take far too much effort. Yet that’s exactly what Abigail did in an era when women were not given equal educations or permitted to vote.

The reason she was concerned with the rising cost of cotton-wool was that it was “wrought up with less trouble than any other article of clothing.” She was concerned with the difficulty of making homespun clothes. While we often have it in our minds that all colonial women spun yarn and wove cloth for their families, this was generally not true until the years just before the Revolution, when patriotic motives encouraged home manufacture to avoid importing goods from Britain. Women had their hands full cooking, cleaning, washing clothes, caring for children, assisting their husbands businesses and other domestic duties. They did not have extra hours to spin or the equipment to weave. But they took on these additional chores as a sort of domestic patriotism. Again, I find myself sadly falling behind their example. My sense of patriotism once caused me to spend an hour online looking for an American flag produced in America (but still affordable.) I might occasionally try to “buy American,” but I would not inconvenience myself so much as to actually avoid buying something made somewhere else.

After mentioning that her uncle advised her to “procure another husband” if her current one didn’t come home soon, Abigail closes her letter by admonishing Congress for taking a wishy-washy stance about separation from Britain, a nation she finds to be “so unworthy of us.” She likens the colonies to obedient spaniels, spurned yet still fawning on their masters. “I would rather endure any hardship than submit” she declares.

And thus speaks the fairer, gentler sex at the dawn of the Revolution. Domestic patriotism like that displayed by Abigail, the women of Edenton (see https://katedolan.com/featured/have-we-forgotten) and others in the private sphere fueled the rebellion far more effectively than the carefully crafted documents negotiated by men in their elected assemblies.

I’m not sure we could count on such domestic patriotism today. I hope we don’t have to, because I, for one, don’t think I could pass the test.

We are fortunate to have Abigail’s letters preserved and easily accessible. I’ve been using The Letters of John and Abigail Adams, Edited with an Introduction and Notes by Frank Shuffelton, (Penguin Books, 2004). Her letter of December 10, 1775 is letter #81.

If you enjoy reading about the different views of patriotism in the days leading up to the War of American Independence, you might like my book Restitution, which is set in Maryland in 1774.  Maryland was a “middle of the road” colony and while leaders wasted little time in raising a militia, most policy makers declared that they were prepared to fight to protect their rights as Englishmen, not to separate from England. The main characters in Restitution may come in contact with the “better sort” who set the policies, but they themselves are on the lower end of the social spectrum, having to concern themselves with the business of day to day living as much as questions of where their allegiance lies.